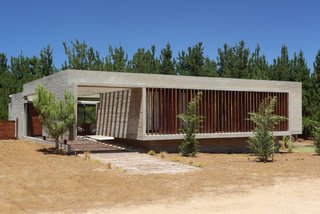 Costa Esmeralda is a private venture on the dunes of the coast of Buenos Aires, 390 km from the city of Buenos Aires. This is a recent development with a young acacia and pine trees afforestation with a few consolidated forest sectors.

The lot to intervene is located in a dune with a gentle slope to the street and a greater slope towards the bottom. This area also has an abundance of trees of young maritime pines. So that, if the vegetation is preserved, anything built in the rest of the lot will be exposed to intense sun and coastal winds.

The commission
The request was a house with an aesthetic-constructive proposal similar to those built in the forest of Mar Azul, valued according to the principals both for its formal austerity and the low maintenance required.

The house would be inhabited mainly in the summer by a family with three children of different ages. It should have a generous space to develop common activities, with a kitchen visually integrated to it, and an outdoor expansion that would allow the enjoyment of the forest. It had to have three bedrooms, one with private bathroom and dressing room and the other two ready to receive eventual guests. All the rooms had to be developed on one level.

The proposal
The house appears as a single volume pierced by a courtyard that actually hides an organization into two distinct sectors by its use and, to accommodate to the dune, they are placed with a difference of 0.45 m concealed abroad at the height of the perimeter beams. These two sectors are connected by a smooth ramp that crosses the divide and by a concrete pergola with a strong presence.

The most private sector of the house is located in the front that is protected from the NW sun and from the street views by a structure of Quebracho sleepers, placed upright and with a random rhythm. The social sector and the terrace expansion are located in direct relation to the trees that occupies the entire back of the lot, but also in contact with the entrance courtyard. This space becomes protagonist of the proposal for its strategic location and the spatial richness that adds the pergola with different sets of lights and shadows that the sun’s path generates throughout the day.

Besonías Almeida arquitectos uploaded S&S House through Add A Home.
Add your own project for the chance to be featured in Editor’s Picks.