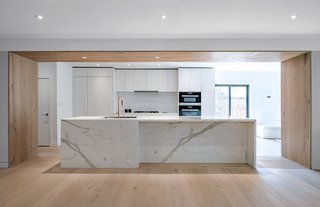 For the Richview Residence, Studio AC was tasked with creating a concept that maintained an open layout while housing as much storage as possible for this growing family. The Richview project was a full interior renovation to re-imagine the function of a home from its 50 year old layout, broken up into small rooms, to its modern day counterpart, an open, functional and intimate layout.

This project presented itself first as an essay in re-definition, in the sense that the existing layout remained essentially in-tact. The design challenge was how to open the spaces up and artfully choreograph movement between them. This was achieved by introducing a linear organizing element in the form of a ‘support spine’ that contains storage, structure, mechanical, plumbing…. heck even the kitchen sink! To allow movement across the plan, openings in this spine are marked with grand 12” wide white oak flooring that switches in orientation and runs up the walls and ceiling, celebrating that moment.

The ‘support spine’ was also treated with a soft grey in contrast to the predominantly white walls to mark its presence in the space and act as a stoic backdrop for main living spaces. The kitchen island lives within a larger wood threshold inside the spine as well. We imagined this piece as a functional stone sculpture centered in the plan, acting a visual anchor and conversation piece.

To create intimacy in the open plan, the living room is sunken to form a room that is visually connected to the dining area, but physically separated by an elevation change, creating an intimate space with a feeling of grandeur. To further emphasize the elevation change, a floor to ceiling rear window creates a connection to the backyard while bringing light deep into the plan.

Once upstairs, Studio AC employed another idea of atypical threshold in the form of a long and narrow corridor leading to the master bedroom. The master bedroom opens up to the rear of the house with an expansive window that aligns with the floor to ceiling opening below. A 9’0 sliding door conceals the en suite that sees a long bench run along the entirety of the space to unify the bathroom. The shower bench extends as a support for a 12’ vanity and culminates as a shelf by the standing tub. The spine separating master bedroom from master bath houses a gas fireplace, linen storage and mechanical services, connecting the conceptual spatial divide of the main floor to the level two layout.

With the exception of expansive windows on the rear elevation, the exterior of the project remained untouched – allowing the home to blend into the neighborhood while using the original arched doorway as a threshold into an unsuspecting modern interior.

uploaded Richview Residence through Add A Home.
Add your own project for the chance to be featured in Editor’s Picks.