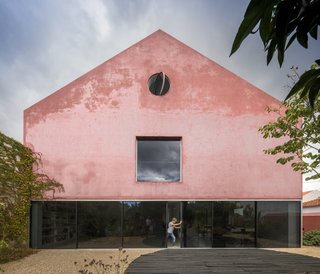 This house is located in a small village in Azeitao, south of Lisbon. Pro-tected by hills from the Atlantic Ocean, the area has a mild Mediterranean microclimate, creating the ideal conditions for growing grapes, producing some of the country’s finest wines.

The project consists of the conversion of a former winery, built by the client’s grandparents at the beginning of the 20th century. Set back from the main road and surrounded by neighbours, accessible along a narrow alley, the plot has a small orchard of orange trees, an oasis in the middle of the village.

Preservation of this orchard determined the whole project. In order to retain the trees, it was necessary to keep the existing building and accept that the two sides of the house, which border adjacent properties, would have no windows.

Only two incisions were made into the existing volume. A 14-meter long window was cut into the west façade facing the orchard, turning the interior and exterior into a single space. A courtyard was inserted into the corner abutting the adjacent properties, allowing light to enter the darkest areas of the house.

The public areas of the house are arranged on the ground floor, occupy-ing the entire footprint. The private areas unfold on the upper level, flanking the facades, generating a sequence of strategically placed voids, which create double and triple height spaces on the ground floor below. The generous scale recalls the building’s former use.

Inside, very specific moments are created; a 9-meter high ceiling gives a palace-like dimension to the entrance hall and open-air showers are pos-sible in the courtyard. A white floor reflects daylight in the interior, mir-rored walls make spaces seem infinite, trapped between reflection and reality, while sliding windows open the entire living room to the garden on hot summer nights.

Designed to suit the way of living in the South, the house was envisioned with a stark but informal atmosphere, where private matters could coexist with a table full of family and friends.

All existing materials were preserved and upcycled during construction; the old roof tiles were reused, stone was transformed into sills, the timber roof structure became an exterior deck.

Retaining the existing walls meant confronting primordial Mediterranean construction techniques, which predated the industrialisation of materials. To make old and new mortars compatible, a lime mortar was developed by a local company working with millennial techniques, combining pure lime with pozzolans. Once it is exposed to oxygen in the air, the mortar will begin to petrify, slowly turning into stone.

A natural red pigment was added to the mortar, to reinforce the build-ing’s presence, allowing the house to age gradually and changing its tonality, without ever requiring a coat of paint. Over the days and months, the colour of the house alters, lighter or darker depending on the humidity, almost black when it rains.

To accentuate the house’s Mediterranean character, a reflecting pool was inserted in the garden. Raised above the ground recalling an old irrigation tank, the black pool mirrors the sky. Since it is not possible to distinguish limits or edges, swimming here is a primordial act; the body in water floats in an absolute void.

In May, when the scent of the orange trees fills the night air, the aroma is intoxicating.

uploaded Red House through Add A Home.
Add your own project for the chance to be featured in Editor’s Picks.