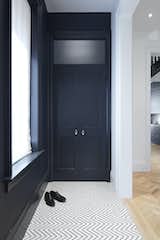 The entrance to the (re) Edwardian House 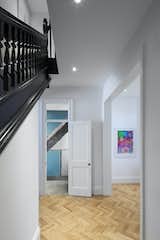 Wallpaper in the Powder Room 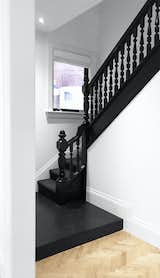 Original Staircase (with some modifications) 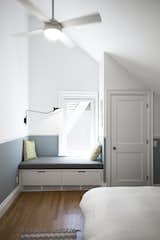 The transformation of this Edwardian House respects the past while offering a contemporary home for its new residents.

The owners wanted to alter this once-grand, old house into a family home, without losing the charm of its original architecture; they also wanted to start construction within 6 weeks of taking possession and to move in before maternity leave was over. They had chosen Post Architecture Inc. for their playful interpretation of old and new as well as their ability to organize a construction project with tight timelines: permits were in hand within 6 weeks of accepting the commission, and 3000 sqft above grade, and 1000 sqft below grade, was gutted, underpinned and finished within a year.

An assessment needed to be made early on whether there were any elements of the old house worth preserving given that restoration is as expensive as building new, but slower. In this case, there were three: the main floor stair, the front door, and the brick shell of the grand house with 11’ tall ceilings on the main floor. Everything else had long been ruined by its use as a rooming house, including 3 kitchens, 8 small bedrooms and long, dark corridors connecting them. The intervention brought back the grandeur of the old house, with large, bright rooms and classic moldings but with a modern twist: hallways and doors were eliminated on the main floor. Instead, each space was given a focal point to delineate it without confinement, and tall windows to the rear yard were added to bring in daylight while also animate family gatherings—a modern luxury.

The age of the house imposed multiple challenges along the way; the condition of the masonry resulted in costly repairs around window openings to prevent bricks from crumbling away; an existing mudroom had to be completely rebuilt when it was exposed that none of the studs were continuous pieces of wood; and once work started to adjust and reconfigure the old stair, it was revealed that the quality of wood, and its structural integrity, was not what was assumed. The trades on site were able to seamlessly repair and integrate it with the new work.

The original stair and pickets were painted a dramatic black colour and can be seen from every room on the main floor. The bottom step was replaced with a square landing which turned the stair access 90 degrees so that it faced the middle of the house and no longer the front door. This, in turn, allowed all the levels of the house to be connected by one generously proportioned stairwell. It also created a transition zone between the dining and kitchen, which also served as an ideal, out-of-the-way spot for a powder room. A photograph of the original stair was turned into wallpaper and adorns the walls of the Powder Room.

The main floor is organized with the dining room at the front, kitchen in the middle, and living room and mudroom at the rear since the family’s main point of entry is from the laneway and not the street. A coat closet was created near the front door, but the bulk of their storage was built into a mudroom with keyed-access from the rear yard. The front door was repaired, re-painted and refitted with thermal glass and new hardware. It sets the tone and colour theme for the rest of the interior doors in the house. Red oak flooring was used throughout but laid in a traditional herringbone pattern on the main floor, in combination with concrete tiles at the front, and diamond-shaped porcelain tiles at the rear mudroom. Painted brick tiles were also used to layer in texture to areas such as the fireplace and kitchen banquette wall.

The kitchen features a wall of tall cabinets, lacquer—finished in navy blue, an all-white Island (including a white sink and white faucet) and a built-in banquette with a butler's pantry, which opens to reveal a bar/coffee station, with whimsical tiling on the back.

The living room's millwork—painted white to contrast that of the kitchen—is interrupted only by a gas fireplace and a tall, thin black metal bookshelf, but the tall white cabinets conceal a 55" TV and almost 5' of tall storage. A blue colour theme runs through the house in varying shades to accent special features: the front door, a walk-through dressing room, and wainscoting in one of the kids’ bedrooms. The blue colour of them is also reminiscent of the original paint colours of the house.