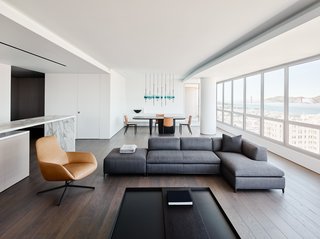 An airy apartment in San Francisco by Garcia Tamjidi Architecture Design is a study in clean lines and visual lushness. High up on the twelfth floor of an apartment building, this two-bedroom three-bathroom apartment, designed for a finance executive who lives most of the time in Marin but wanted a pied-a-terre in the city for those late nights at the office, was created to almost—but not quite—disappear into the background.
The magic is in the details: cedar panels that line the closets, adding both a subtlety of striation and a flash of brightness that adds depth and richness to the whiteness of the hidden closets. Or in the volume balancing that appears in both the bedroom and the living room, where, in the former, a long desk attached to the wall mirrors in solid form the void that runs along the back of the bedroom; in the latter, the entertainment center’s empty bottom is reiterated by a long credenza built into the side of the dining area.
The apartment is a study in planar materiality. Sumptuous visual textures, like a stunning marble bar whose underside cants downward, creating a sense of both weight and movement, contrast with the repetitive grids of the newly-designed windows. Sliding doors create either privacy or openness between the central area and the master suite, and lighting and orientation create a stunning display (currently, of a Martin Puryear piece, Face Down (2008), on loan from the John Berggruen Gallery) towards the end of the master suite hall.
The bathrooms are ultra-luxurious; the guest sink perches on top of a solid slab of marble; in the master bath, that same marble lines all of the surfaces, creating one continuous visually velvety look and feel. The kitchen is crisp and clean, with appliances built into the cabinetry; and the pocket of a dining area is suffused with light from a custom pendant—a piece of art in and of itself—and oriented around a sturdy column whose shape both comforts and orients the visitor.
Materially, the engineered-oak floor creates a sense of continuity and perfection that runs throughout the entire apartment, while white-painted cabinetry and the occasional beige veneer contributes to an architecture that is suffused with subtlety and blending, and that begins to speak only as much as the visitor wants to see. This is a rare apartment that is full of architecturally-significant moves, full of striations and volumetric experiments and a deep attention to the play of light and shadow, and it is also restful, comforting, a place to slow down.

uploaded Private Residence 4 through Add A Home.
Add your own project for the chance to be featured in Editor’s Picks.

The crisp white kitchen features appliances built into the cabinetry and marble countertops.