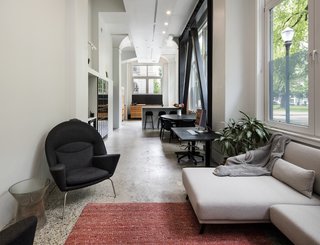 Along the beautiful tree-lined Park Blocks of the Pearl District in Portland, stands an old
industrial building with a curious past. Built in 1909 by Bennes, Hendricks & Tobey
architecture firm, what is now the North Park Lofts started out as the headquarters for
the Blumauer-Frank Drug Company. In 1941, The Burnett Car Company purchased the
building — which was already considered to be virtually bomb proof, due to being built
out of super-reinforced concrete — and updated it with new wiring and automatic
sprinklers, so that it laid claim to being the most fire-proof building in Portland. Because
of the building’s incredibly high safety standards, in 1942 it was leased briefly by the
Federal Reserve Bank of San Francisco to store personal and professional possessions
for Japanese citizens that were being sent to interment camps.
After changing ownership in the 1990’s, the building became known as the Artisan
Building, housing artists, professional photographers, an art gallery and a deli. In 1997,
Enterprise Development converted the existing 6 floors into lofts, and also added 4
additional floors. The commercial unit (formerly the main lobby and entrance for the
building) went through several iterations — as creative office space and then an art
gallery — before becoming Remedy Wine Bar in 2012. After 4 years in business, the
wine bar closed, and Steve— one of the bar owners who also had purchased
the commercial unit from the previous owner — decided to turn the property into his
dream loft.
Partnering with YBA Architects, and hiring Leif Warnberg as his General Contractor,
Steve had a very precise vision for the functional design he wanted in the 1,100 square
foot space. Being 7’ tall, Steve had long loved the soaring 18’ ceilings and historic
windows, with spectacular views of the park. The layout is open and functional for a
man of his height, with all of the kitchen and master bath counters designed and built 8”
taller than standard, to a 42-inch height. Every square inch of the space was
thoughtfully considered, including closets with slide-out shelving built to hold his size 17
shoes, and a pantry hidden behind custom-welded steel and mirror doors. All of the
surfaces are either CaesarStone or PaperStone, and the spacious kitchen is equipped
with Miele appliances (including side-by-side European-style speed and steam ovens),
a Thermador induction stovetop that visually disappears into the counter, and a
SubZero refrigerator with front paneling that matches the custom built Doug Fir
cabinetry. Perhaps the most spectacular piece, however, is the 8’ long handcrafted Fiji
Mahogany wood tub that Leif built at the conclusion of the project, layering each tier
upon the previous one and then sealing it with resin, much like one would build a boat.
The owner has a love for unique, one-of-a-kind spaces, and this elegant dream loft is no
exception!

uploaded Park Ave Live Work through Add A Home.
Add your own project for the chance to be featured in Editor’s Picks.