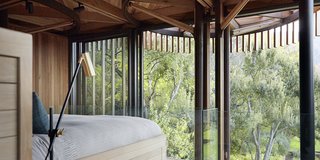 The Constantia Valley in Cape Town, South Africa, is the oldest wineland region in the country, with some of the vineyards dating back more than 300 years. The area is famous for its natural beauty, but it is also known for its concentration of historical Cape Dutch architecture.

Graham Paarman’s family estate, with its extensive, forest-like gardens and spectacular views of the valley and mountains in the distance, clearly references the style. The manor house and other buildings are arranged along the lines of a Cape Dutch werf, or traditional Cape farmyard.

Some time ago, while on a trip to Italy, Graham discovered a book of modern tree houses, which planted a seed in his mind. He works long hours at the family culinary business and yearned, he says, for “a sense of escapism from the realities of modern life.” He began nurturing the idea that he’d like to live among the trees in a one-bedroom retreat, away from the more developed parts of the estate.

He envisioned something subtle and small, probably asymmetrical. “I never wanted a building that was going to impose itself,” says Graham. “I hoped it would blend in and enhance its surroundings, and would invite the outside in.”

Malan Vorster Architecture Interior Design had worked on the estate over the years and Graham approached them with his idea. “I wasn’t prescriptive,” he says. “I gave them fairly broad-stroke direction.” The team—architects Pieter Malan and Jan-Heyn Vorster and designer Peter Urry—favored a particular clearing among the trees overlooking four reflection ponds.

What formed in their minds was not so much a tree house as an abstracted architectural interpretation of a forest: a levitating cabin in the woods. The floor plan resembles a pinwheel, with four circles overlapping an imperceptible square. At the center of each circle, steel pillars in groups of four represent tree trunks, and branch-like beams circumscribed by steel rings overhead support the floors above. The result is a series of “curves flowing from straight lines and rectangular shapes that become drums,” as Malan puts it.

The rooms are arranged vertically: the living area on the first floor, the bedroom on the next, and, on the top, an open-air viewing platform. “There are tall sliding doors at the front that open up over both levels,” says Malan. Vorster notes how one feels at once embraced by the building and exposed to the “vastness of the landscape.”

The custom bed and cabinetry are all made of solid oak using traditional jointing details. The focus on natural materials is carried through in the furniture. “I’m a fan of warm materials and textures—wood, stone, and leather,” says Graham. This is evident in everything from the marble top of the coffee tables to the brass fixtures and lamps to the leather-clad headboard. “We tried to keep the colors subdued and almost neutral, so that you’re really more aware of what is going on outside the house,” says Malan.

For Graham, that’s the secret of the cabin’s success. “The architecture makes quite a singular statement,” he says, but that’s not what he loves most about it. “Living here allows me to connect with nature in a very intimate manner,” he says. “You can see the fantastic night skies and the squirrels in the trees. You can hear the birds.” He pauses before adding, “It restores a sense
of balance. It’s just a very special space.”

Lofted amid eucalyptus and oak trees, Graham Paarman’s house is a glassed-in, steel-frame structure with a veil of vertical slats. Excluding outdoor areas, it measures about 720 square feet.

The kitchen features elm cabinets made by Valcucine in Italy.

The bathroom tap is by Vola and the sink is by Ceramica Flaminia.

Lofted amid eucalyptus and oak trees, Graham Paarman’s house in South Africa is a glassed-in, steel-frame structure with a veil of vertical slats. Excluding outdoor areas, it measures about 720 square feet. Half-round bays project to form a balcony, a pergola, a dining alcove, and a bathroom.

Like the built-in bed, nightstands, headboard, and other custom furniture, the staircase leading to the open-air viewing platform was made by Versfeld. The Lektor desk lamps are by Rubn.

Half-round bays project to form a balcony, a pergola, a dining alcove, and a bathroom. Dix Aluminium and Glass doors and windows face four reflection ponds.