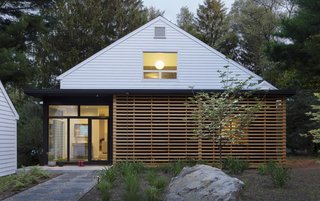 Three old barns were converted to a mid-century modern home in the 1950’s by Henry Hoover, a prolific architect that built many modern homes in Lincoln MA. In 1990 parts of the house were renovated to create an eclectic facade and gallery with a sculptural kitchen and entry. Twenty-four years later the house is undergoing another transformation by us that clarifies the architectural lineage of the original structures and the Hoover design.

The young family that bought the house loved the large windows, generous proportions and connection to the landscape but found it difficult to use the kitchen and gallery space. Although much admired by the family and neighbors it was decided to remove most of the 1990s addition. This move allowed us to reveal the simple forms of the three original barns.

The new entry is contained in a simple single story addition with a flat overhanging roof reminiscent of the Hoover design. Floor to ceiling glass on the entry side and a fixed wood screen on the living side make a simple composition that is warm and inviting as well as being private. New wood floors, a full kitchen and master suite renovation, as well as a complete overhaul of the HVAC system were also included in order to create a warm, spacious, and contemporary home.

Aamodt / Plumb uploaded Modern Barns through Add A Home.
Add your own project for the chance to be featured in Editor’s Picks.

Modern Barns is a 4,300-square-foot dwelling consisting of a series of timber volumes with pitched roofs.

The "sculptural" kitchen was replaced with a new open-plan cooking space, where concrete countertops are paired with glossy white cabinets and large windows frame views of the landscape.

A cedar screen was also added to the front of the living barn, providing privacy while allowing light into the home.

Floor to ceiling glass on the entry side and a fixed wood screen on the living side make a simple composition that is warm and inviting as well as being private.

The living room, located at the centre of the dwelling, features bleached-ash flooring, mid-century furnishings, and aqua and chartreuse homeware. Ample glazing provides views of the verdant back garden.

In the master bathroom, a soaking tub sits beneath a sloped roof with a skylight.

Upstairs, original cork flooring was coated with a semi-transparent grey stain, giving it a "fresh look".

Close up of the cedar screen.

The home is characterized by large windows, generous proportions and connection to the landscape.