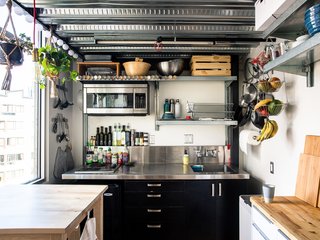 Max Heinritz was born 28 years after the publication of Jane Jacobs’s The Death and Life of Great American Cities, but his embrace of urbanism—with all its chaos—takes a page from her playbook.

Max’s modestly scaled loft, for which he designed and made many of the furnishings, sits on the top floor of a 1908 building that went condo in 2006, offering homeowners a no-frills berth in the heart of San Francisco’s downtown. Just outside the front door awaits a dizzying array of shops, theaters, and corporate offices, including Twitter’s, as well as a robust population of street denizens.

For Max, who left his job as a Google engineer late last year in order to work more independently on early-stage software projects, the location is perfect: “I spent a long time on that shuttle to Mountain View, and it convinced me that being in a vehicle isn’t an optimal way to experience life. To me what’s most important are interesting work and interesting people—and here I’m close to both.”

Once he found a place within his budget, Max set about transforming it into a tricked-out yet cost-efficient home base from which to engage with the city at large. And although he hadn’t been much of a DIY poster child beforehand (despite being the son of a retired carpenter, who lent some advice), Max was emboldened by an experience he’d had five years prior, when he’d used a sewing machine to whip up a furry coat for Burning Man. “It made me realize that if I want something, I can figure out how to make it.”

The public area, a combination living-dining-screening room, has an exposed brick wall that lends it the feeling of a SoHo loft. “It’s one of my favorite things about the place,” says Max, whose influences were a mash-up of New York boutique hotel, industrial vibes, and the movie Avatar (represented by the profusion of hanging plants). In order to create an intimate dining area without blocking the path between projector and screen on movie nights, Max devised an overhead light using a pine beam and three IKEA pendants that cantilever over the table and are raised and lowered by a pulley.

Even cord management takes a novel turn. Max concealed the wiring for his surround-sound system in painted black PVC pipes that blend in with existing sprinkler pipes. The wires emerge on the wall as artistic outlines of California and the Transamerica building, while power outlets nestle behind black fabric dots.

Two of Max’s early interventions were replacing the ladder leading to his loft bedroom with a staircase and adding a sliding barn door at the top. He made the tabletop for his standing desk from a slab of salvaged Douglas fir and crafted a sound-dampening headboard from insulation panels, with a layer of yoga mat to absorb vibrations.

In the end, the 678-square-foot loft feels neither spartan nor cramped, thanks to a thoughtful approach to space configuration and copious vertical storage. Decorative touches—glowing wall sconces crafted from LED lights and linen, circles of mirror that sparkle in the double-height skylight, and colorful strands of thread lights found in Paris—meld utilitarianism with personal expression.

And if Jane Jacobs is Max’s fairy godmother, Marie Kondo may be his spirit animal. Everything has its place, from the clutch of nearly identical gray shirts that line his closet to the spices on the magnetic rack in the kitchen. One gets the sense that if an object didn’t bring Max joy, it would be immediately jettisoned. “I wanted to establish a sense of safety and order,” says Max. “Now that I have that, I feel equipped to go forth and do interesting work that solves problems and makes people happy. It’s all coming together.”

A software engineer outfits his tiny apartment with flexible design ideas.
Max’s modestly scaled loft, for which he designed and made many of the furnishings, sits on the top floor of a 1908 building that went condo in 2006, offering homeowners a no-frills berth in the heart of San Francisco’s downtown. Just outside the front door awaits a dizzying array of shops, theaters, and corporate offices, including Twitter’s, as well as a robust population of street denizens.

Inside his San Francisco living room, Max Heinritz kicks back on a Söderhamn sectional from IKEA. “In Tokyo, everything is space- efficient, nothing is wasted,” he says. “I’m sort of going for that, too.”

Max devised a movable plywood beam that holds a trio of pendant lamps to swing down as needed. A wood piece covered in chalkboard paint hides the electrical panel. “Slate was too expensive,” he says.

Circular mirrors adhere to the inner walls of a skylight above the dining area, bouncing light and bringing the room yet more illumination.

For his bedroom, Max designed a custom headboard insulated with several layers of cotton and upholstery fabric to reduce sound.

The custom overhead light is a pine box covered in linen, which diffuses the LEDs inside. A gray linen curtain conceals his tools.

The kitchen, located behind the stairs and underneath Max’s bedroom, is all electric, with two burners, a rice cooker, a slow cooker, and a toaster oven. Max added industrial shelving and a butcher block. “Vertical storage,” he notes, “is very important.”

“I wanted to have a cozy dining area, so I thought about how I could do it in a way that wouldn’t impede the projector,” says Max. He mounted the device, a ViewSonic, atop the living room window.

Max likes to do screenings for friends: “The first time I hosted I showed Planet Earth. Next up is Koyaanisqatsi: Life Out of Balance, a 1982 experimental film by Godfrey Reggio with music by Philip Glass.”

A bedroom next to the living area has an overhead lantern Max made by wrapping string soaked in glue, water, and corn starch around an inflated balloon, deflating it, and then lining it with rice paper-mache.