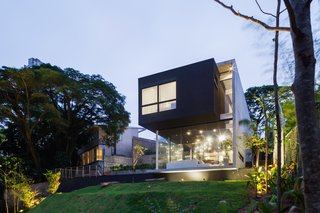 The project has just received an award on the fourth “IIDA Best Interiors of Latin America and the Caribbean Competition”, organized by the International Interior Design Association (IIDA). The residence won the category “Residences – Single Family”. This is one of the most important awards to recognize architecture projects that represent the highest level of creativity, originality, and design excellence in Latin America and the Caribbean. The award was received at Maison&Objet Americas, in Miami, FL.

The main challenges for the execution of this project were the steep slope of the land and solar insolation. In addition, the objective was to develop a project for a young, modern family who wished to build a house where they can live for the rest of their lives. After intensive studies of the terrain and the spatial organization of the residence, the proposal built was an occupation in different levels.

The first level holds the garage, the access and a garden. The family area is on this same level, but suspended. In order to increase the privacy, visitors are directed past the hall and down the stairs, into the social area, located one level down.

This second level provides access to the service areas, gourmet kitchen and dining room. Its double-height ceilings integrate it to the home theater and the circulation area above, and there is an access to another garden level. The final level, slightly below, holds the living room, completely open to the view and an outdoor plateau with a sunroom and swimming pool.

The house has a mixed structure; the exposed concrete wall on the left is the element that connects and organizes the different levels of the architecture. The remainder of the structure is metallic, with light components, which allows for large glazed areas. With this, the project acquired contrast – full and empty spaces, light and heavy – incorporating a modernist architecture to the residence.

The FGMF firm was also responsible for the project’s interior design. The spatiality, nearly minimalist and defined by glass panels, the dark coating of the upper block and the concrete on the wall and floors were essential for the choice and definition of the furniture. From these elements, the proposal was to combine classic modern pieces like Eames’ Plywood Chairs and Saarinen’s Womb chair with contemporary pieces by Brazilian designers including Jader Almeida, Marcus Silveira, Felipe Protti, Natasha Shlobach and Estudio Bola.

Closing this project, there is a large light fixture in the dining room consisting of 36 independent pieces, designed by FGMF in partnership with Prole studio, exclusively for this house. The piece may be seen from different angles – from the room itself, from above the dining room, from the access walkway to the bedrooms and home theater – and it has become an element of tridimensional articulation between these different levels.

About FGMF Arquitetos
More than 15 years ago, when they decided to open their own architecture firm, FGMF Arquitetos, the trio Fernando Forte, Lourenço Gimenes and Rodrigo Marcondes Ferraz already knew what they wanted to achieve: they wanted to be recognized by the academia and by the market for their original projects. With the purpose of developing a contemporary, investigative and innovative architecture, acting in all scales and programs, from the details of a residence to an urbanistic plan, it was this plurality, rather than specialization in a specific type of program, that helped define the firm’s DNA. Today, their portfolio includes over 320 projects. The firm made its mark in 2009, by integrating Wallpaper* Magazine’s Architects Directory, which featured the trio of Brazilian architects as one of the 30 most promising and breakthrough architecture firms in the world. Their projects have been published internationally in more than 20 countries, including the United States, Germany, China, Italy, India, Korea and Spain.

Since FGMF was founded, they have received more than 81 awards, including the international Wan 21 for 21 award, where they were featured in the list of the 21 architecture firms of the 21st century. The firm also received the Chicago Athenaeum Award, in the USA; the AIT Awards in Germany; the Dedalo Minosse 2011 and 2014 in Italy; three Re-Thinking the Future Awards, a worldwide award that brings together the main names in architecture; and, recently, the firm received awards in two categories of the fourth “IIDA Best Interiors of Latin America and the Caribbean Competition”, organized by the International Interior Design Association (IIDA). In Brazil, there have also been multiple awards, including one from the Architects Institute of Brazil (IAB, Instituto de Arquitetos do Brasil), from the Brazilian Association of Architecture Firms (AsBEA – Associação Brasileira de Escritórios de Arquitetura); the 1st Azkononel Architecture Award, promoted by Instituto Tomie Ohtake; among others, ranging from residential projects to institutional, to urbanism.

FGMF Archtects uploaded Mattos House through Add A Home.
Add your own project for the chance to be featured in Editor’s Picks.