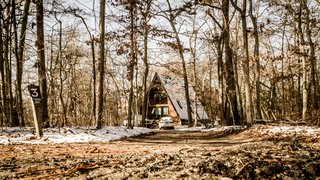 The Lokal A-Frame is a boutique vacation home rental 50 minutes outside of Philadelphia. It was designed and renovated by Chad and Courtney Ludeman - the team behind Lokal Hotel and the 100K House. The home was purchased from the original owners who built the A-Frame on a 2.5 acre, wooded site fronting the Maurice River in the mid 1960's. The home had not seen a renovation since it was originally built.

The Ludeman's brought their 6 and 8 year old boys to the site the day after purchasing it and setup camp next to it. They all pitched in with the help of the in house construction team from Philly and renovated the home over the next few months while living onsite. The home was renovated in a Scandinavian Modern style with pine plywood, whitewash white oak flooring, concrete counters and tile and lots of black and white paint.

The main changes to the home were to demo a wall on the main floor that broke up the middle of the space, finished half of the basement into a bunk room with 4 beds built into new alcoves and shifted the hallway upstairs over as much as possible to convert the half bath into a full bath with concrete shower walls.

The front facade was torn out completely with new sliding doors and triangular windows from Anderson installed to flood the living area with light and views that it had been deprived of originally. All of the original beams inside and out were stained black and leftover cedar cladding from a Philly roof deck job contrasted the black beams and window frames for a completely refreshed facade.

The Ludeman's and their crew poured a lot of concrete for this project. A 44' long countertop stretches from the front of the house to the back and was poured in three sections. The front is in the living room, the middle the kitchen and the rear contains the home's bar with ice maker. A custom concrete fire pit and countertop were poured out back next to a Big Green Egg grill and both bath vanities as well as a custom jacuzzi tub top was poured. Finally all of the bathroom tile was concrete from Cle Tile and the shower and bath walls were treated with a vertical concrete product that was troweled on by the crew.

An 800 SF deck was built off of the back of the house surrounding and preserving existing trees on the site. At the end of the deck is an 8' diameter wood fired hot tub made from a feed trough from a local Tractor Supply store. With the help of Studio Bryan Hanes from Philly, who came down on a day trip and worked for grilled short ribs and beer, a new path was forged to the river about 100 yards away and trees were strategically limbed up while a few were removed completely to open up a view of the water from the house that did not exist when the day started. The Ludeman's wanted a beach vibe on this rural river for their guests and Bryan Hanes came up with a great idea to build a retaining wall and bring in 30 tons of sand to create a "rural wooded beach" 10 feet back from the original concrete bulkhead that was in need of costly repairs that the budget could not support.

The furnishings were handled mostly through a collaboration with Article. The Ludeman's didn't have the time or budget to spend countless hours searching for the perfect mix of old and new furnishings from multiple locations. They needed one company that valued design, comfort and versatility to furnish most of the space quickly. Article fit that bill perfectly and helped choose 90% of the furnishings with the owners. The Nirvana sectional was at the top of the Ludeman's list and continues to be a guest favorite. There are wrestling battles over the corner location where you sink into a deep, relaxing state while the shadows of the trees wash over you.

One of the pleasant surprises with the Article lineup was their newly expanded exterior line which is versatile enough to do double duty inside and out. This allowed chairs and end table to serve double duty both in the living area or on one of it's three decks, depending on where guests are congregating. Two custom pieces by local craftsmen filled out the furnishing needs. One is a live edge table/kitchen island made by Timberforge Woodworks and the other is a glass topped coffee table made from a salvaged wagon wheel by Ovuud.

The home is available for rent on AirBnB and through Lokal Hotel's website. It quickly became more popular than the Ludeman's imagined and has been booked up 100% since it's launch in January of 2018.

uploaded Lokal A-Frame through Add A Home.
Add your own project for the chance to be featured in Editor’s Picks.

Living room from loft with the fought over Nirvana sectional by Article.

Bunk room in basement with custom artwork on floor by Sean Martorana. Curtains by West Elm.