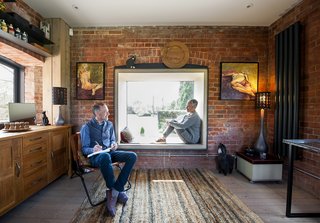 A leaky four-story former water tower may not be the first place that springs to mind when picturing bright, clean living quarters. But following a refurbishment in a small town in southern England, a landmark Victorian-era brick tower is now a cozy retreat and “a special place to sit and unwind,” says owner Sheryl Wilson.

Nine years ago, Sheryl and her husband, Andrew Hollins, both amateur equestrians, bought the property, which includes a cottage next to the tower, a courtyard, and even stables for their horses. They’d previously renovated some unconventional homes, such as a former chapel, so fixing the tower wasn’t quite a leap into the great unknown. But it was their most ambitious undertaking to date, Sheryl admits.

“The tower had been turned into a residential property some time ago, but it was very tired, the heating was inadequate, and the interiors weren’t up to modern standards,” she reports. Furthermore, the 645-square-foot structure, built in the early 20th century and occupying a plateau in New Forest National Park, suffered from rain ingress and dampness. “Around a third of our living space is in the tower, so we wanted to put a lot of time and effort into the project,” says Sheryl.

The couple approached Darren Bray of Lymington-based PAD Studio with a proposal to consolidate and weatherproof the building, while at the same time preserving its original brickwork. “We had in mind a new entrance that would make a good, strong impression,” says Sheryl. “The existing windows had great views, but they had heavy frames that cut out a lot of light, so we wanted to replace them. A new internal staircase was also needed.”

The six-month restoration stripped away doors, partitions, and thick, almost medieval window frames that had been added over the years to emphasize the building’s historic brickwork. Panes by Crittall and Smart Windows were installed to maximize natural light and improve thermal performance.

The overall mission, according to Bray, was to “form a narrative thread through the tower.” He started with the new aluminum front door with a protruding window on the level above—a “camera lens” onto the courtyard and gardens.

A sculptural steel staircase connects the third and fourth floors. Manufactured off-site and lowered into the tower through a third-story window, it rises up through a newly created double-height space that was formed by cutting away part of the fourth floor. The staircase culminates in a vaulted bathroom, the centerpiece of which is a freestanding copper tub.

The reimagined tower exerts something of a restorative effect on its owners. “We probably spend more time outside than in, with our horses, but when we’re looking to unwind, it’s a lovely place,” Sheryl says. “I didn’t think it warranted being turned into something ‘chi-chi.’ It’s a classic example of ‘less is more.’”

In Fritham, England, Andrew Hollins and Sheryl Wilson repaired a water tower with the help of PAD Studio. An adjoining cottage containing bedrooms, a kitchen, and more is outfitted with LG solar panels.

Each floor of the tower is about 160 square feet. Prior to the formal renovation, Sheryl added mosaic tile from Fired Earth in the entrance hall. The hanging lights are by Industville and the high-back chair is by Nigel Griffiths.

The tower, which now holds a study and several other living spaces, was in disrepair. Its original brickwork had to be washed inside and out, and the exterior was coated with a hydrophobic mineral paint by Keim to make it harder for rain to penetrate.

Littlehampton Welding made the steel staircase on the third floor.

The couple approached Darren Bray of Lymington-based PAD Studio with a proposal to consolidate and weatherproof the building, while at the same time preserving its original brickwork. "We had in mind a new entrance that would make a good, strong impression," says owner Sheryl Wilson. Architect Darren Bray peeled back the layers of the previous owners' decor to allow the brickwork to breathe.

The bathroom occupies the highest chamber of the tower. A vintage pendant purchased from Skinflint Design hangs above a copper sink by William Holland.

A freestanding copper tub, also by William Holland, sits exposed in a corner of the bathroom. The matching tile for the vanity and floor is by Marco Polo.

A lens-like window, whose steel frame juts out toward the courtyard, has a built-in beech plywood seat for admiring New Forest National Park. The chair is vintage.