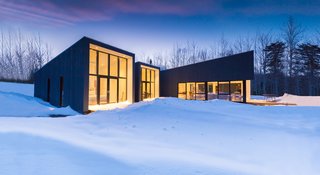 This Cape Breton prefab retreat is nestled in a hardwood forest along the shores of the Bras D’or Lake. The mandate for this project was to create a simple dwelling with a clear separation between the public and private realms while respecting the natural environment. The home consists of three separate wings connected by a central bridge or hallway that ties the distinct spaces together. Each wing begins modestly, with the lower end of an exaggerated shed roof anchored in the forest. As each volume approaches the water, the ceiling rises consistently and the views of the lake and distant shore unfold into the expansive floor-to-ceiling mahogany windows. The central wing connects the public and private wings, and acts as the hub of the house, containing the entry and the homeowner’s office. The project was prefabricated and panelized off-site in order to speed up construction and to limit the amount of time that the structure was exposed to the elements. The 1,900 square foot home was assembled on site in only two days. The wall panels consist of staggered 2x4 studs on a 2x8 plate which eliminates thermal bridging and maximizes energy efficiency.

Nicholas Fudge Architects uploaded Lake House through Add A Home.
Add your own project for the chance to be featured in Editor’s Picks.

This 1,900-square-foot home was assembled on-site in just two days with wall panels consisting of staggered 2' x 4' studs on a 2' x 8' plate, which eliminates thermal bridging and maximizes energy efficiency.