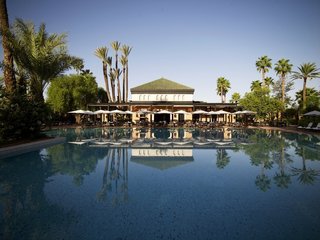 Thanks to a massive makeover, La Mamounia is more fantasy than ever before: huge and bright and excessive, a glittering combination of the Art Deco and Moroccan traditions with mosaics, painted columns and gleaming marble floors. Turbaned waiters, belly dancers, and doormen wearing fezes greet a new celebrity set that includes the Clintons, Naomi Campbell and Tom Cruise. The old entrance, admittedly charming but rather small, has been replaced by a vast reception hall, with potted palms and fountains in which fragrant petals float and the perfume of 10,000 roses hangs in the air.

Options abound here. The televisions in each of the rooms are programmed to French, English, and German channels, so you can stay tuned to BBC news while listening to the Muslim call to prayer. There are five restaurants serving every imaginable cuisine, a spa and a casino. There are rooms modeled after railway carriages and ocean liners, and three walled bungalows specifically set aside for guests who still practice segregation of the sexes. It can be a bit overwhelming, and it's understandable why a few people mourn the quiet, faded dignity of old Mamounia.

On that note, a few tips for your stay. Stick to Moroccan food, genuinely authentic, and cooked by a hefty-armed, all-female staff — women are considered the best chefs in the country. Drink at the Churchill Bar, one of the last remaining pockets of the old Mamounia style with its black leather and chrome. And the most charming suite is a toss-up between the Baldaquin and the Churchill Suite.

Also, don't forget to shop. You're in the center of Marrakech's spicy old quarter and just steps away are boutiques hawking cinnamon, silk, and silver. After dark, wear gauzy dresses and spindly heels, as you will be in the company of starlets, diplomats, and trophy wives. And if you are feeling over-saturated, take a walk in the gardens. Three hundred years ago, the king was so in love with this eighteen-acre garden of olive trees and fragrant bougainvillea that he made it a wedding present for his son. Today, it is the one thing in the hotel that has escaped renovation, and it is still just as beautiful as ever.