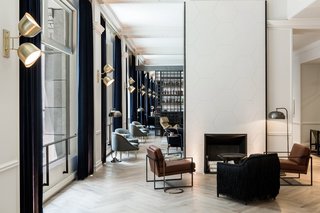 Mid-century modernism has never been bigger, and nobody benefits more than Chicago. The new Kimpton Gray Hotel is a perfect example. It starts with a building with plenty of character, originally the Chicago headquarters of the New York Life insurance company, built more than a century ago. But once you’re inside, you’ll find the Gray’s interiors are a cool blend of contemporary style and the mid-century design for which Chicago is so well known.

It’s named for the gray marble of the original building, and the rooms, suitably enough, stick to neutral colors, with just a touch of sky blue. It’s a bit more sober and serious in aspect than the average Kimpton hotel, a slight formality that suits the setting well — the Gray’s Loop location means it’s a business hotel as much as a leisure hotel, after all.

Vol. 39 is the lobby bar, which is styled after a law library — maybe you didn’t know you wanted to drink among bound legal volumes, but it turns out you do. Steadfast serves New American cuisine with Mediterranean and Portuguese accents, and Boleo, the rooftop lounge, serves a menu inspired by Argentinian and Peruvian street food, all under a retractable glass roof to allow for revelry in all seasons.