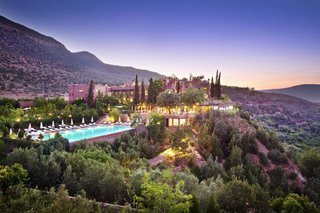 Morocco is an undeniably intoxicating country, especially for Europeans. It’s fitting, then, that the story of Kasbah Tamadot’s beginnings reads like something from a modern fairytale: Sir Richard Branson’s mother first spotted this majestic estate while her son was preparing one of his balloon expeditions. Previously the private retreat of an antiques dealer, its traditional Moorish architecture remains filled with treasures from both North Africa and the far East — today, though, it’s a luxury hotel operating under the Virgin Limited Edition banner.

Less than an hour’s drive from Marrakech, nestled at the foot of the breathtaking Atlas Mountains, approached by a long and winding path, the sprawling Kasbah leaves little to be desired. Landscaped gardens surround the property, and the intricately walled courtyard houses a stunning deep-blue rendition of the ubiquitous Moroccan reflecting pool. Each of the 28 guest rooms continues the theme of decadence, particularly the pièce de résistance: the three-room Master Suite, designed as a mini-replica of the Kasbah itself. Oh, and the ten standalone luxury tent suites probably bear mentioning as well, particularly in light of the jacuzzis…

Whether you’re swimming lazy laps in the indoor pool or gazing toward the river valley from the outdoor infinity pool, the Kasbah Tamadot duly soothes any residual travel nerves. Though Atlas mountain treks and muleback rides are offered, the hotel’s grounds just might tempt you to remain captive, with your day’s most adventurous journey being a leisurely stroll from a sweat in the hammam to the rooftop terrace for a traditional Moroccan feast and mint tea. The name means “soft breeze” in Berber, after all.