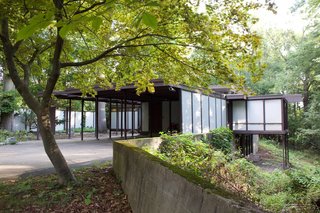 1960 Japanese-inspired post and beam designed by Kalamazoo architect Norman F. Carver, Jr. One of 3 homes designed and built concurrently for a group of Western Michigan University faculty on neighboring lots using the same contractor. Three other homes designed by Carver were later built on the remaining lots on the street, creating a cohesive Japanese village style grouping.

Our house was the ugly duckling as the previous owner had added a pitched roof totally not in keeping with the house and neighboring homes (all have flat roofs). Other modifications done by the previous owners included covering up beautiful ceiling beams with drywall and removing architectural features such as Frank Lloyd Wright style trellises. Beginning in Spring of this year, we started to reverse these changes, removing the drywall ceilings thus exposing the beams. Then, faced with extortionate quotes for roof restoration from roofing companies (70k), we decided to tackle the project ourselves. Working with two helpers I removed the shingles, decking and trusses of the pitched roof. We discovered 2 layers of old flat roof underneath, one rubber with fiberglass insulation and the original tar and gravel roof below that. These were both removed. Numerous additional posts that were added to support the weight of the pitched roof were also removed. All in all we filled 3x 30yd dumpsters with material removed from our roof. We installed a new TPO single white membrane roof over tapered insulation, rebuilding overhangs and the trellises mentioned before. The roof restoration allowed previously blocked clerestory windows to be uncovered and the light from them is spectacular.

Our house is no longer the ugly duckling on our street and the neighborhood looks cohesive once more. At 89 years old, the architect has been very interested and helpful in the restoration and is very happy we restored the house to its original form. Before photos at bottom. Follow Trystcraft on Instagram for more photos from our restoration.

Trystcraft uploaded Kalamazoo Post and Beam Restoration through Add A Home.
Add your own project for the chance to be featured in Editor’s Picks.

Another maple in our side patio turns red