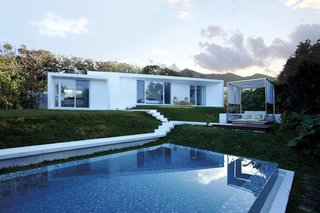 If there’s a place where modernist minimalism still feels authentically connected to the local tradition, it’s Japan — and while hotels the world over abandon the “international” style in favor of the new eclectic, bohemian look, true believers like Yutaka Momiyama, proprietor of Jusandi, are keeping the faith. Comprising a mere five villas on the Okinawan island of Ishigaki, Jusandi is a distinguished piece of architecture, with a sublime natural setting to match — this is the far southern end of Japan, much closer to Taiwan than to Tokyo, which means beautiful beaches, crystal-clear water, and lush sub-tropical forest.

It’s something of a passion project for Norihito Dan, an architect whose résumé tends towards large-scale projects like office towers and airports. Here you’ll live an architect’s dream: a stunning natural setting framed thoughtfully, never ostentatiously, by a dwelling that’s custom-tailored to its site. Throw in a plunge pool for good measure and you’ll see that luxury and minimalism can go hand in hand. Some villas are one-bedrooms, others two, and all share a private beach that’s rather more heavenly than you probably expect from Japan. The snorkeling, diving, and other water sports are exquisite, and the highlight just might be the Blue Cave, a coral-fringed cavern with quasi-mystical properties.