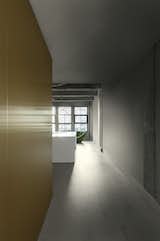 IN 3 is a minimalist interior design located in Montréal, Canada, designed by Jean Verville architecte. With his IN 3 project, architect Jean Verville proposes an architectural installation juggling with excesses and exuberance while retaining its signature of an assumed minimalism. The proposal calls for mechanisms of perception of space that break the usual patterns of domesticity. In order to satisfy the needs of everyday life, but also to subtract them from time to time in order to create a working environment that strengthens the maestro’s concentration, the bare space skillfully conceals functions in a succession of sculptural volumes. The gray tones of the raw materials unite into a volumetric entity pierced by an immense golden structure deploying to abolish the hierarchy of spaces.

Leibal uploaded IN 3 through Add A Home.
Add your own project for the chance to be featured in Editor’s Picks.