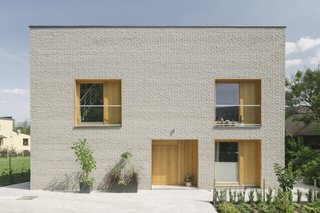 The design process started with the function – quite extensive, mainly due to the large number of family members. The vast living area is complemented with five bedrooms, three and half bathrooms and some utility and storage rooms. The main challenge was fitting the function into a compact and economical form, as well as adjusting it to its narrow, irregularly shaped site.
Adjusting the building into the site, while simultaneously fulfilling the functional requirements, was possible only through minimizing its distance to the borders of the site. It proceeded, however, with a need to rethink the general layout of windows – they were placed in loggias, one meter deep.
The shape of the roof is a direct result of mitigating the client’s desire for a clean, contemporary look with a horizontal roof, and the urban regulations, which required building a sloped roof. The final form, as a product of many reiterations, is hidden behind the attic wall, but it fulfills the additional function of bringing light inside the house.
In terms of construction, we strived to achieve the highest quality using affordable materials; thus, for facade we opted for an concrete bricks that are commonly used for fences - perhaps an unconventional choice, but extremely durable, visually pleasing and tactile. The windows were executed by local carpenters, after the same module: fixed glass panel with a smaller, mobile wooden opening; the module introduces a perceptible rhythm on the facades, while the wood finishing adds contrast in terms of color and texture.

MFRMGR Architekci uploaded House S17 through Add A Home.
Add your own project for the chance to be featured in Editor’s Picks.