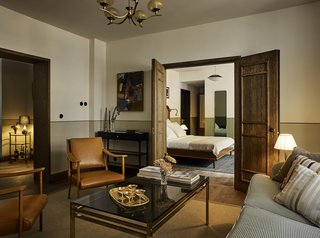 Copenhagen is certainly one of the world’s capitals of design, as well as the epicenter of hygge — that indefinable coziness that’s become the hallmark of Nordic hospitality. But until recently its hotel scene was somehow less than the sum of its parts. Among the hotels that are changing that, however, is the Sanders, a 54-room luxury boutique hotel owned and operated by the celebrated Danish ballet dancer Alexander Kølpin.

The London-based design team Lind + Almond transformed this 1869 building into something that’s both cozy and modernist, both contemporary and nostalgic, blending lush comforts with moody atmospherics and everywhere embellishing the impeccably stylish spaces with little visual surprises. It’s as mature a hospitality debut as we’ve seen in a long time — these rooms are the equal of any high-end boutique hotel, not just in Copenhagen but in London or New York, which is all the more impressive for the fact that the Sanders is a one-off.

Also impressive are the public spaces, from the Kitchen restaurant and Tata cocktail bar to the Conservatory, on the rooftop. And you’re by no means limited to what’s within the walls of the hotel — the service concept here is “a curated stay,” which means the staff are full of ideas (and connections) for creating your ideal Copenhagen experience.

The Sanders Bedrooms come in different sizes, and they have all been designed with their specific features in mind. They are beautifully furnished according to the feel of the room, and all the bedrooms come with a king size bed, a plush lounge chair, and a spacious bathroom with a walk-in shower and lavatory. The rooms face the street or courtyard.

Sanders apartment is the ideal choice for travellers looking for a long-term stay or the possibility of entertaining guest in an apartment offering privacy, understated luxury and beautiful furniture. The apartment consists of a spacious bedroom with a king size bed, a separate lounge with an open fireplace, and a kitchenette/dining room. Furthermore there is a spacious bathroom with a walk-in shower and separate lavatory. The apartment faces the street and courtyard.

A nice and intimate room with a queen size bed, offering more square metres but the same design and refined atmosphere as the Coupé rooms. It is the perfect bedrooms for the single traveller looking for a bit more space, or for couples looking to cosy up in a snug bedroom. The room faces the atrium.

The Coupé rooms are ideal for the individual traveller looking to spend a night in Sanders’ cosy, intimate surroundings. The design is inspired by luxury train cabins from the golden age of travel, providing plenty of comfort and luxury in the relatively limited space. The bedrooms consist of a single bed and a private bathroom with walk-in shower and lavatory, and they face the residential courtyard.

The master bedrooms are ideal for travellers looking to spread out and relax in a refined atmosphere. They consist of a spacious bedroom with a king size bed and a separate lounge. They are equipped with handpicked furniture adequate for entertaining guests, or just for kicking back and enjoying the beautiful design. Furthermore the rooms all have a spacious bathroom with a walk-in shower and separate lavatory. The rooms face either the street or the courtyard.

The kitchen is the beating heart of the hotel as well as a local hangout for Copenhageners. Sanders Kitchen has the atmosphere of a private dinner party, a chef who likes to hang out with his guests, and a menu that is as unfussy as it is tasty.

Since 1932, the historic Royal Danish Theatre has had a performer whose name and importance is known only to the performers; the red velvet curtain Tata. Every night she sets the stage for the shows at the theatre, and in an homage to that the hotel has named their cocktail bar after her.

The courtyard is thoughtfully decorated with greenery and hand-picked furniture, creating an inviting oasis in the heart of Sanders. This inner sanctuary is covered and during the colder months an open wood burning fireplace is the perfect place to warm your spirits. Order food in the courtyard or just bring a drink, a blanket and a book.

The Living Room is equipped with an open fireplace, brimming bookshelves, vintage and bespoke furniture and appealing seating arrangements. Hang out and experience this friendly and inviting heart and soul of the hotel with a vibrant and upbeat atmosphere on weekend nights.