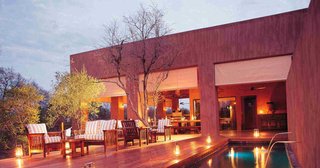 Bordering on South Africa’s famed Kruger National Park is the Manyeleti Game Reserve, encompassing nearly a hundred square miles of wild bush, populated by all manner of game, up to and including the Big Five. It’s home to some humans as well, namely the Mnisi tribe, who own and manage the lands. And now it’s open to a select few visitors as well, guests of the Honeyguide Tented Safari Camps.

They’re more or less exactly what the name would have you believe — on one hand there’s the Mantobeni Camp, the slightly more rugged and retro-romantic of the two, and on the other there’s Khoka Moya, the slightly more comfortable and contemporary of the two (also notable for being the one which allows children).

The appeal is exclusivity, but only to a point. The park is private, which means Honeyguides guests are unlikely to cross paths with much outsider traffic. But within the camps there’s a refreshingly egalitarian, community-oriented vibe — meals are taken communally, and there’s every opportunity to indulge in a bit of camaraderie, especially at Khoka Moya.

Aesthetically it’s as authentic as they come, and the offerings, from the food and drink to the twice-daily game drives, are first-rate. It’d be an excellent introduction to the world of the modern safari, and a fine alternative to anyone whose experience is limited to the big public parks.