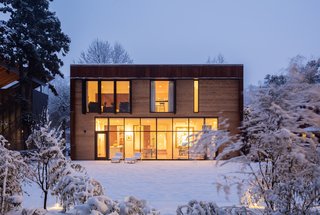 The project involved designing a modern, 1500-square-foot addition for a two-story, red brick, Georgian Revival-style house built in 1916 in a historic inner-city neighborhood with narrow lots and minimal set-backs between houses. The addition would become the primary hub of activity for a growing family and an ideal space for entertaining. Programmatically, it would include an open kitchen, dining, living area and a spacious master bedroom suite.

To uphold the general scale of this neighborhood and the manner in which the existing house has addressed the street for over 100 years, the addition’s mass is held within the outer planes of the old house, tucked against its rear elevation. And unlike other proposals the owners had seen, the plan divided the public and private spaces between two stories rather than letting the new construction consume the majority of the property. As a result, the architects retained a generous backyard for outdoor play space.

For the exterior walls, the architects chose Corten® steel because it is as durable as the old house’s brick veneer and it relates to its color tones. Wood siding at the rear elevation adds an element of warmth to the rugged steel, similar to the way in which the old house’s white wood trim creates softer edges against the brick.

How the existing house and the new construction linked together structurally presented the challenge. During design development, a sectional opportunity presented itself that would avoid a head-on collision between the old gabled roof and the addition’s flat one, and between the differing floor and ceiling heights: a slender, double-height interstitial space between the two structures. This innovative solution let the rooflines retain their individual character, created a gentle transition between floor and ceiling heights, and left the rear brick wall of the old house, windows included, intact. The brick provides a compelling textural contrast to the smooth white walls of the addition.

This double-height space marks the moment when the existing structure ends and new construction begins. To punctuate the statement this section seems to suggest, two tall, slim windows appear like exclamation points on either end of the space, letting sunlight spill through.

This transitional space was the logical location for an additional staircase at the back of the now-enlarged house (the original main staircase is located just inside the front door), which leads directly to the master suite on the second floor. To continue the transparency established in the addition, a local artisan, Tactile Studio, fabricated a black, perforated-metal staircase. A low glass wall fronts the landing.

As with all traditional homes from its period, the 1916 house is a series of rooms whose purposes are contained within four walls. In contrast, the addition is a series of spaces where functionality flows seamlessly from one into the other. Anchored on one end by the couple’s new minimalist kitchen and on the other by a fireplace between built-in display shelves, furniture placement alone defines the living and dining areas. Unimpeded by walls, natural light fills the entire space.

Directly above the living/dining/kitchen on the first floor is the spacious, sun-lit master suite. Outside the master suite, adjustable louvered “fins” across the glazing protect the interior from uncomfortable glare.

The addition responds to the intent of the old house and builds upon its existing narrative of family, heritage, fine taste, and social grace, Simultaneously, it introduces an entirely new narrative that tells the story of a more open, relaxed lifestyle with 21st-century amenities and attention to energy efficiency. Both narratives are articulated through materiality (brick and steel), form (a historic foursquare box and a simple, modern, rectilinear appendage), and spatial relationships created through floorplan.

As a result, the couple’s residence has been reinvented into a home that embraces casual, modern living without having to sacrifice any of the charm and character of the historic house. And within the old, established neighborhood, the venerable brick façade still greets the street as it has for 100 years, while the view from the mid-block alleyway behind the house reveals an unexpected expanse of rust-colored steel, glass, and natural wood.

uploaded Hillcrest House Addition: An Innovative Approach to Old + New through Add A Home.
Add your own project for the chance to be featured in Editor’s Picks.

The modern addition in the snow at dusk.

By keeping the addition's mass within the planes of the original brick house (seen at left) and dividing the public and private spaces between two floors, a backyard is retained on a narrow inner-city lot.

During design development, a sectional opportunity presented itself that would avoid a head-on collision between old and new: a slender double-height transitional space.

Left: Louvered "fins" keep the sun's glare out of the master bedroom upstairs. Right: Diagram demonstrating the sectional opportunity between old and new.

Double-height space serves as a transition between old and new.

To maintain the sense of transparency in the addition, local artisans fabricated a perforated metal staircase.

The addition responds to the intent of the old house -- family, heritage, fine taste, and social grace -- while introducing an entirely new narrative about a more open, relaxed lifestyle with 21st century amenities.

In the transitional space (right), the red brick rear wall of the original house stands in contrast to the smooth white walls of the addition and indicates respect for the historic integrity of the old home.

View from the new kitchen to the fireplace that anchors the space at the opposite end. The glass wall provides views of the backyard and the architecturally diverse neighborhood.

The venerable brick façade still greets the street as it has for 100 years, while the view from the mid-block alleyway behind the house reveals an unexpected expanse of rust-colored steel, natural wood, and glass.