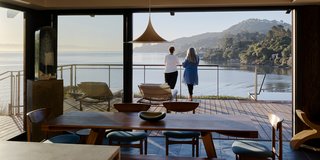 When Darla Anderson and Kori Rae came across a property for sale in Tiburon, a secluded town just north of San Francisco, they were enthralled by its intoxicating mix of site and structure. The 3,070-square-foot house was designed in a Japanese style that the couple love and is set in a thicket of tropical plants and pine trees that overlooks a cove, creating a sense of tranquility within striking distance of the city. “There’s such a grounding and spiritual feeling on the property,” Kori says.

The dwelling, which Darla and Kori purchased in 2012, has the hallmarks of a traditional Japanese minka, with its dark wood siding, steeply sloped roof of ceramic tile, and post-and-beam construction. But despite its authentic appearance, the residence is neither very old nor entirely unique. It’s a “Nikko Farmhouse” from Haiku Houses, a kit-home company that specializes in models based on 16th-century Japanese country houses, and it was delivered and built in 1991. Kit houses, in which all the parts of a house, except for the plumbing, heating system, and lighting, are delivered pre-cut for on-site assembly, were first developed in the early 1900s as a cost-effective way to build a home before power tools became common. Today, kit houses remain a relatively affordable alternative for a cabin or other simple structure, though designs by Haiku Houses, which feature imported Japanese tile, heavy timber framing, and high-end finishes such as redwood paneling, are not a budget route, costing $150 to $300 per square foot, plus site preparation. Each kit is also customized for the client and the location: The company works with local architects to add rooms, adjust room sizes, and ensure that the concrete piling foundation works for the site before fabricating the components.

The original owner of the Tiburon house had added a number of custom features that after 20 years had a dated appearance. In addition, the master suite felt like a cramped loft because of the slope of the roof. But Darla and Kori, who were moving to Tiburon to escape foggy San Francisco, didn’t mind. They figured they’d live in the small boathouse on the property while they completed a modest renovation and became used to their new commute—both are producers at the animation giant Pixar Studios, located in nearby Emeryville. “In our minds, all you had to do was grab a Sawzall, saw the wall that enclosed the kitchen in half, and put a counter on top,” Darla says with a laugh. But a connection from work convinced them to do more. The husband of Darla’s former assistant, a set designer named Michael Grasley, suggested they consult his brother-in-law Prentis Hale, principal of Seattle-based SHED Architecture & Design. “Michael kept saying, ‘You guys, this place is so cool, you’re doing a disservice if you don’t fix it up,’” Darla recalls.

So the couple did exactly that, hiring Hale to reimagine the home’s interior.The heavy timber post-and-beam structure gave the designer enormous leeway; the bays between the massive Douglas fir columns are 16 feet wide, akin to a commercial office layout. “None of the walls were load-bearing,” Hale says, “so there was quite a bit of freedom in reconfiguring the floor plan.” One weekend, he and Grasley created a mock-up of the proposed renovations, devising an immense kitchen island out of foam core and stretching fabric across the kitchen ceiling to show what it would feel like if they added a master bedroom above it. This “set design” sold Darla and Kori on a major transformation of the space.

Hale kept the home’s basic footprint, framing, and tiled roof largely intact. Inside, he maintained the heavy columns, combed spruce ceiling, and distinctive triangular skylights around the Douglas fir rafters that give the house its back-to-nature spirit. To create a greater connection to the outdoors, Hale opened up the ground level with enormous sliding glass doors, so that the rear of the house flows out to an enlarged deck that overlooks the new pool, the new outdoor kitchen, and the cove. He relocated the front door so that it’s off-center, increasing space on one side of the living room and creating an office on the other side. He turned a bedroom adjacent to the office into a meditation space with a raised, tatami-lined floor, something that Kori had always wanted. On the loft level, the new master suite has a squared-off roof dormer that rises above the original tile but blends in with its Rheinzink cladding. In a gutsy move, Hale also removed the aged redwood siding and replaced it with white-painted drywall.

For the designer, reworking such an unusual home led to surprising—and exciting—results. “I would never have come up with that house if I was doing it from scratch,” says Hale. “It would probably be a lot less interesting.”

Prentis Hale of SHED Architecture &amp; Design reimagined a kit home in Tiburon, California, that was erected in 1991.
Photo:

More Japanese minka than Sears Roebuck, this kit home in the Bay Area—complete with a meditation room—provided the right bones for a renovation.

Openings in the ceiling allow sunlight to wash over the black slate floors and fir columns. A velvet-upholstered Mr. Chair by George Mulhauser adds color to the living room.

The kitchen features Japanese ash casework and Jacques Biny lights, made in 1956. A Semi pendant by Gubi hangs above a De La Espada table.

The light near the roof deck is by Roll & Hill

In the master bath, Hale chose slate tile for the floors and green-and-brown glass tile by Lunada Bay for the walls, both from United Tile. The Japanese Ofuro soaking tub, crafted from Hinoki wood, is by Zen Bathworks.

For the heart of the space, Hale designed a double vanity—fabricated with wood from the original house—around an existing column. The pendant is by Lindsey Adelman.

The landscape was devised by Hale along with Kate Stickley of Arterra Landscape Architects.

The new interior includes a meditation room with an Isamu Noguchi lamp, flooring made of tatami mats, and a Murphy bed for visitors.