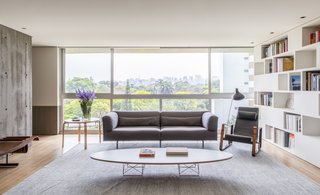 The project of Gravatá 61 apartment renovation of 240m² gave us the possibility to interfere again in another unit of the same building, an icon of the Paulista Modern Architecture designed by the great architect Rino Levi in 1964.
The program, like the renovated apartment in 2016, facilitated the project of adaptation of the 60s way of life to the present days, modernizing the facilities, eliminating compartmentalized spaces, highlighting the elements and recovering the original structural aspects one more time. The grouping of pillars on a structural longitudinal axis redefines the new projected environments.
The total modification of bathrooms positioning, originally ventilated through a shaft, defined the spaces and it is a differential of the solution adopted in Gravatá apartment in 2016.
The demolition of the entire kitchen block and pantries and its opening for the original dining room, now a TV´s room, defined the most used space of the apartment, with the integration of kitchen, the TV´s room and garden.
The finishes used follow a neutral and smooth palette being broken by the black wooden cube that defines the kitchen. The use of apparent concrete in the structure of the longitudinal axis of the apartment in addition to uniting the entire project reinforces the original language so striking of this building reference of modern architecture of São Paulo of the 60s.

uploaded Gravatá 61 through Add A Home.
Add your own project for the chance to be featured in Editor’s Picks.