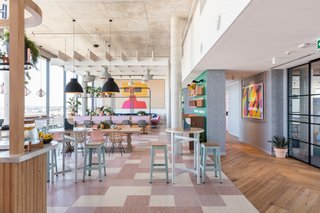 Here at Tablet we don’t have much cause to use the phrase “airport hotel” — the picture it puts in mind is roughly the opposite of the sort of inventive, well-located, well-executed hotel that is this website’s reason for being. But there are exceptions; typically, the neighborhoods around airports are in particularly dire need of a bit of personality, and that’s something the Felix Hotel has in plentiful supply.

The style, sensibly, looks just a little bit backwards, to the days when jet travel was novel, exciting, and even glamorous — the exterior is clearly contemporary, but the interiors go mid-century modernist mad, with bold colors, busy patterns, and clean-lined modern furniture. It’s meant to deliver the opposite of the soporific effect of a typical beige-carpeted business hotel, and while there’s no mistaking the setting, adjacent to the airport, for Kings Cross, it’s fair to say the result is something memorable.

Rooms range from Economy all the way up to First Class — though they start out substantially more comfortable than an economy-class airline cabin — and feature 55-inch televisions, rain showers, and blackout curtains at every level. Meanwhile a rooftop cinema and a delightful cocktail bar are the envy of many a boutique hotel, to say nothing of virtually 100% of airport hotels. May they all look like this someday.