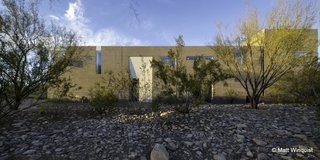 "Life thrives in the shadow of the boulders" was the concept behind this robust home in Scottsdale, AZ.

Amit Upadhye designed a house in the desert, capturing the essence of the native climate to create a dwelling sensitive to the phenomenological aspects of living within the desert. Memories and visions of boulders and shadows in the desert were borrowed in the formation of the project. It was through these borrowed moments of the desert that brought the concepts of micro-climates and desert living to the Essence of the Desert House. The boulders act as heat sinks and as thermal masses.
The Native Americans were aware of this phenomenon, often building homes in the shadows of such boulders. It is through this challenging and yet engaging nature of the Sonoran Desert that allows for meaningful and poetic dialogue between place and built environment, creating opportunities for natural phenomena to be translated into meaningful architecture rooted in the nature and essence of the desert.

Images of boulders were constant through out the design of the project, being used metaphorically to create the walls of the residence. These walls cast desirable shadows on the east and west parts of the project were the family would be spending most of their time. The house is separated from the garage by a two-story high chasm that runs north to south, acting as the spine of the composition. This spine connects the main house to the detached guest house to the north through the open patio.

Amit Upadhye uploaded Essence of the Desert through Add A Home.
Add your own project for the chance to be featured in Editor’s Picks.

from the pool looking west into sunset

Inspired by the color of Strawberry Hedgehog cactus thriving in the front yard of the house, the window wants to be an abstract flower drawing guests toward the front entrance. The wall lights are abstract luminarias of the southwest landscape.

Fabric patio that connects the main house to the guest house.

Double height kitchen with the warm mass of cabinets rising like a stalagmite in the cavern scaling the height while the hung pendant lights from ceiling coming down like stalactites to the human scale.

South facade with a robust CMU block. The entrance scrim is the abstract medieval gate announcing the entrance with a man gate scale opening scaling it down to human scale, leading to a small courtyard inside. The fabric scrim filters the harsh south light in the the courtyard and gives privacy from the road.

from Pavilion looking at the master suite, family room and lofted kitchen

Main house patio connecting to Guest house patio. The both meet at the entry courtyard to the Guest house. The notch in the masonry fence wall receives the setting sun of the owners' marriage anniversary.

The notch in the masonry fence wall receives the setting sun of the owners' marriage anniversary.

Dining room with a covered patio and fabric curtain(open position) for privacy and harsh south sun.

Concrete stem wall mutates and rises to give birth to the window composition. The notch in the masonry fence wall receives the setting sun of the owners' marriage anniversary.

Entry courtyard to the right and dinning room in the front flanked by covered glass patio.

Dining room seen from hallway. Pantry to the right with orange barn door.

Fabric scrim screen the view to the road and casting cool ambient light in the entry courtyard.

Fabric scrim is beveled slightly inward as gesture to invite guests in to the entry court behind.