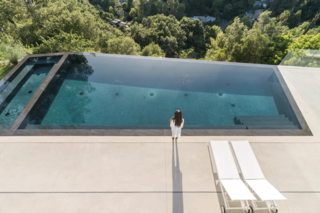 The 5,500 sf building is located at the crest of the Benedict Canyon hillsides, overlooking the entire serene landscape of the Beverly Hills neighborhood. It is loosely situated within the footprint of a former, now demolished, one-story 1950s residence.

Facing multiple challenges in cosntruction and development, Domaen consciously decided to build the building on the flat portion of the property and expand the exterior and infinity pool into the steep slope, supported by long caissons. A design-build methodology was employed and streamlined to meet a fast moving schedule, with the dynamic design process that evolved during construction. The methodological constraints of the project led to explorations of an ‘elevational’ architecture, focusing on systemic alignments and misalignments as tools to create a dynamic, yet minimal façade. Formal elements are accentuated, and exaggerated. Planes are simultaneously thickened and destabilized through the opening of corners and separation from the ground surface.

This allowed freedom in developing a free plan that emphasizes zones rather than rooms, which is played out with various degrees of privacy; the building is obscured to the street-front, yet completely open to the scenic view in the West. The ground-floor opens up to the elements using the architecture as framework for views of the landscape beyond. The second floor, which features the most private areas has a discreet roof terrace, which is set into the roof surface to exercise another dialogue between privacy and openness.

The entrance is shielded by a long, heavy, elevated wing wall that not only forms part of the ground floor and sidewalk enclosure but also embraces an interior courtyard with an entry pond. This allows the east facade to be completely opened up over two stories while being visually almost inaccessible from the street.

The deck and zero-edge pool cantilever over the steep hillside and are extensions of the floor plans rather than landscape elements. This enhances the continuous interplay between interior and exterior throughout the house and artificially increases the footprint.

The material vocabulary of the project is reduced to three related elements. The extensive glazing, with its reflective and transparent surfaces and thin dark glazing frames, is starkly contrasted by white stucco facades. Wooden slats serve as a textural mediator through the use of parametrically generated undulation. Inside, material contrasts continue. Expressed through sharp-edged geometries and articulated datum, juxtapositions of white stucco, grey stone, and soft, warm wood surfaces unfold throughout.

domaen ltd. uploaded ELL - A developers dream through Add A Home.
Add your own project for the chance to be featured in Editor’s Picks.