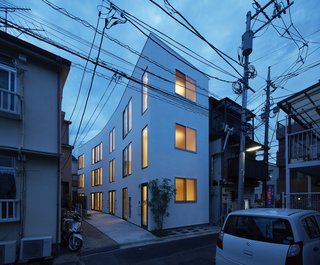 E-1 is a minimalist architecture project located in Tokyo, Japan, designed by Naf Architect & Design. The project, a long three-story flat which consists of six dwelling units, three studios and three duplexes, stands along a private passage diverged from the street in front of the premises. Behind the entrance doors of the flat is a white long and thin space whose entire surface is painted in white. Behind this layer are the living space such as kitchen, dining, and living room. The layer is facing south along the private passage, functioning as buffer zone between the passage and living space while receiving sunshine and wind and delivering them to the living areas. The six dwelling units have different room layouts but share the same structure of the layered living space. The flat building draws a slow curve, giving a unified impression to the exterior.

uploaded E-1 through Add A Home.
Add your own project for the chance to be featured in Editor’s Picks.