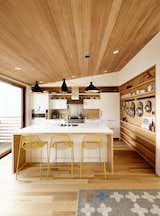 In San Francisco, the tug between new (slick, contemporary condos) and old (wood Victorians) plays out in Dogpatch, a historic district that houses a large collection of turn-of-the-20th-century homes that survived the 1906 earthquake. One of those Victorians is an 1890 cottage that caught fire in 2008, destroying everything but the shell. That allowed a young couple who’d been searching for a single-family home to have the best of both worlds:
a Victorian with 21st-century interiors.

“The fact that it was in such a bad state made everything possible,” says Patrice Martin, who owns the cottage with her husband, Nathan Wilson. “It was a blank slate.” When the couple inspected the fire-ravaged house, they were living in a Mission District apartment with their infant daughter. Despite the building’s four scorched walls, holes in the floor, and back door that opened onto a void where once stood a deck, they saw potential.

Before they even bought the house, the couple knew they wanted local firm Red Dot Studio to renovate it. Nathan and Patrice had been impressed by a Red Dot makeover that turned a one-bedroom into a three-bedroom without any additions. They purchased the structure in 2013, hired Red Dot, and divided their labor.

As co-leader and creative director of the nonprofit design organization IDEO.org, Patrice works on projects fueled by the notion that human-centered design can improve lives. One of her recent projects was Design Kit, an online learning platform that seeks to “tackle the challenges of poverty.” She was the natural choice to collaborate on the renovation design decisions. Nathan, a private investor, oversaw budgeting and construction.

The home’s historic designation meant that any alterations to its exteriors, mostly unscathed by the conflagration, had to adhere to strict guidelines. But inside, everything had to go. This was a silver lining. Such historic homes have notoriously dark railroad layouts in which narrow hallways lead to one room after another.

In their redesign, architect Karen Curtiss, Red Dot’s principal, and project designer Alix Daguin focused on the building’s core. “The idea is that we had a simple house and a side yard that lets in all this southern light,” Curtiss says. “We wanted to go up and capture some of that light.”

Working with an empty shell, the designers created a 13-foot ceiling on the main floor, located above street level. Within that they tucked a “house-within-a-house” against the southern wall. The mini-house encloses a guest and powder room. Its “roof” catches the sun that pours in through four skylights above it.

The designers then directed that light downstairs by keeping the rest of the core open. “Indirect light is a nicer, softer light,” says Daguin. A bridge that connects the kitchen to the living/dining area is made of slatted hickory and a glass panel, which also helps send light downward.

Excavating the floor to increase the ceiling height also helped make the downstairs more hospitable, turning what had been mostly crawl space into a master bedroom suite and a bedroom and bath for the two young children the couple now have. Today the house boasts an additional 600 square feet of living space—in all, some 1,480 square feet.

The team stuck to a simple material palette, choosing hickory, cedar, steel, and glass—“so in the small space, you aren’t overwhelmed,” says Curtiss. The biggest back-and-forth was over how much exposed wood versus how much white paint to use.

To comply with historic preservation, the designers rebuilt the deck with cedar. Using metal would have allowed more light into the downstairs, but the city felt wood was more historically appropriate.

In the end, the couple got what they wanted. Charm on the outside and modernity on the inside, not to mention family who live three blocks away. “We spend a lot of time in our home,” says Nathan. “As we watch our girls play or have family dinners, I still have moments where I pause and think, ‘Wow, we waited and worked to get here, and now it’s happening.’”

Swell lights by Pablo hang above Hot Mesh stools from Blu Dot. The millwork is by J. Spix Fine Cabinets.

A bridge links the living area to the kitchen.

By eliminating the attic and carving out a former crawl space, Red Dot Studio created room for the residents’ bedrooms underneath the primary living areas. The slatted-hickory-and-glass bridge allows light from a row of skylights to penetrate deep into the lower level.

Because of the home’s historic designation, the team was limited in what they could change about the facade. They were allowed to repaint it, however, from baby blue to Gray Cloud by Benjamin Moore.

Above an enclosed volume containing a powder room and guest room, a quartet of skylights brightens the living and dining area. A Sonneman Stiletto pendant offers extra light.

The motif of slatted hickory continues in the bold open-plan master suite, which features multifaceted Diamond White tile by Porcelanosa and a Hoffman bed, with its headboard removed, from Room &amp; Board.

The lower level is distinguished by stained concrete flooring. In the hallway, a Molded Plastic Chair by Charles and Ray Eames for Herman Miller offers a place for the residents to remove their coats and shoes. The seat has an Eiffel base.