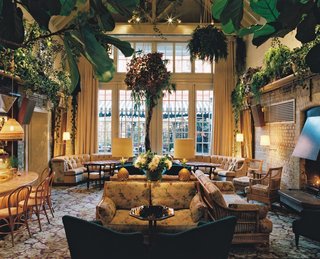 By now we’re comfortable saying that André Balazs, of Standard Hotels and Chateau Marmont fame, knows how to open a hotel. Chiltern Firehouse was packed to the rafters before the paint was even dry, and it’s been the overwhelming favorite among famous names from both sides of the Atlantic ever since.

What’s the secret? Chiltern Firehouse is as notable for its restaurant as for its hotel, and it certainly helps that the chef is Nuno Mendes, formerly of Viajante, at Bethnal Green’s Town Hall — even in restaurant-mad London, he’s a unique talent, and his cooking is well worth the hype. The setting, in a converted Victorian firehouse in a corner of Marylebone that’s in the midst of something of a renaissance, is suitably full of character. As for personalities, a hotel only attracts big names if it can deliver on the promises of classic hospitality: this means balancing glamour and style with an air of absolute privacy and discretion.

But the credit ultimately has to lie with Mr. Balazs, and it’s clear he hasn’t lost a step when it comes to crafting inviting, surprising spaces. The décor is perfectly measured, the whole experience designed down to the smallest detail by Balazs, Studio KO, and the Chiltern’s in-house creative team. The result is something that looks and feels effortless, as though it just fell into place, which is of course an effect that requires meticulous, painstaking work.

As a hotel it’s surprisingly intimate, just twenty-six rooms and suites, all of them with fireplaces and sumptuous Art Deco bathrooms. They’re cozy and warm, above all else, the absolute antithesis of the aggressively overstyled boutique-hotel rooms of decades past. And as a hotel guest you’ll have access not just to the Chiltern Firehouse restaurant, already one of London’s hottest tickets, but to the inner sanctum that is the Ladder Shed, the bar-within-a-bar that’s limited to hotel residents and the occasional atmosphere-improving interloper. Hospitality is, among other things, the art of creating places where people want to be — and by that standard, the Chiltern is a smashing success.