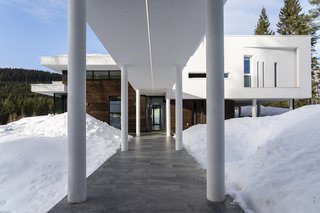 This house is not merely about esthetics, it is about bringing natural settings and Architecture into dialog. Finding the small Stream and opening up, landscaping it, and giving it back to nature as a visual end influential element. Then creating the dialog with the house itself. This becomes an intellectual challenge where the house concept is created by the natural settings (difficult to see in heavy snowy pictures). The opened-up-Stream, together with strict boundaries for where to be allowed to built created a great challenges in defining the concept and giving the house it´s form, which interacts with the natural settings, making it a great experience entering the house on bridge above the sound and experience of trickling waterstream, accompanied with birds singing and smell of wood and water.

Thus, the house itself is not taking anything away from nature, it is bringing nature back, and even emphasizing the encounter of nature, defining the nature. The architectural aesthetics are based on clear choice of materials, the wooden base and the raised plaster-volume, creating the instrument to play with compositions. The simple and rather strict columns and bridges are a resemblance to the wooden tree-trunks surrounding the site, simultaneously giving a modernistic, even functionalism-association to our architectural history. The bridge continuing stringently inside the house makes an architectural clarification of the volumes and concept, partly two-storey livingroom is a playful and exciting spatial differences, giving encounters to both the TV-room upstairs and the roof terrace as well, thus giving possibility to read and understand the Architecture and concept of the house from different settings, angles and elevations.
The kitchen and dining are integrated in the overall layout of the plan, becoming a distinct part of the livingroom, although defined by a lower ceiling. Thus, materiality and colortones become important to emphasize this integration. The design focus on this unity and flow in spatiality.

The materials are natural and simple, with a soothing color-palette with great natural materiality that, inspite of its modern denomination, it responds and belongs to the nature surrounding it. The project appears thus as a completion or a synthesis of the factors creating it, the reestablishment of the nature, the concept and the materials used for its aesthetic completion. The innovative part being the rediscovery and reestablishment of the nature, using it as a targeted mediator for the creation of the concept.

Gudmundur Jonsson Architect uploaded Casa Myhrer Hauge through Add A Home.
Add your own project for the chance to be featured in Editor’s Picks.

The entrance, a bridge over the stream (not showing in snowy winter picture)

The spa-like bathroom of Casa Myhrer Hauge offers sweeping views of the surrounding landscape. Gudmundur Jonsson Arkitektkontor wanted the design to play off of nature, not encroach on it.

Facing the view over the Maridalen Valley