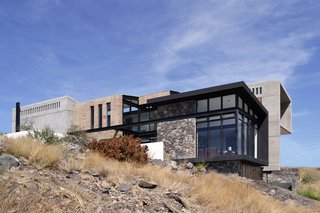 The project Casa AB is based on an architectural program of 623.90 built square meters (6715.60 sqft), developed along three stories, taking place over a site with a drastic slope, located in one of the highest points in the city, inside El Bosque Country Club, in Leon, Guanajuato, Mexico. The design adapts either to the natural conditions, as to the visual that the zone offers.

The site is characterized mainly by its natural slope, and its rocky formation, which becomes the factor for proposing a design based on platforms which work as series of terraces, in a manner where the land is intervened in the least possible way, provoking a unified interaction between the land and the project itself as one.

The design begins with the structure of the project, which is planned as a primary element that takes part of the internal spaces in a natural manner, leaving the structure completely visible and integral to the composition of the routes and paths, with an intention of creating an esthetical structural solution.

The structure is proposed in a way that significantly benefits the spaces, leaving free floorspace, with a sense of spaciousness, permeability, and an esthetic contribution from any interior or exterior space of the project. The structural solution is integrated with the architectural elements, in order to the used materials take part of the space and be part of the structural solution at the same time. The concrete, conjugated with steel, both are left exposed to manifest their characteristic and form part of the total contour of the project, being able to be appreciated from any point of view, the structure responds with a proper and esthetic value to the project.

The ground floor works as the social area, concentrating the spaces of interaction without segmenting the interior spaces, attempts to communicate spaces between different levels, as interior and exterior, in a direct and indirect manner simultaneously, resulting in a bond between spaces. As there are no divisions of walls on the ground floor, it creates a feeling of spaciousness and fluidity that is accompanied by double heights and transparency with the limits to the exterior. The staircase is located in a central point, and is used both as a sculptural element, as the link between the social and private area, and the concentric point of the upper floor, connecting bedrooms, studio and terrace.

The design contemplates being part of the site and nature, with gestures that invite it to be unified by means of patios, terraces, and green areas that integrate the project in a subtle way, while making use of the sensation of visual and spatial permeability which provides the proposed materiality.

e|arquitectos uploaded Casa AB through Add A Home.
Add your own project for the chance to be featured in Editor’s Picks.