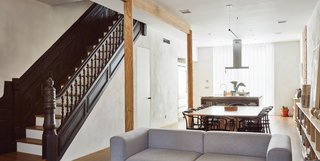 Mornings in the Snyder-Burns household are brighter than most. The master bedroom and bathroom share an open plan, with the shower tucked inside a glass cube with a skylight above. Unusually for a narrow building of this vintage, the space is so bathed in sunlight that resident Lauren Snyder says it’s like showering outdoors, despite being in the heart of Bedford-Stuyvesant, Brooklyn. “It’s probably not for everyone, but it works for us,” she says.

Lauren is the owner of The Primary Essentials, a home goods store in nearby Boerum Hill that stocks works by many craft-based designers, including ceramic artist Helen Levy, weaver Doug Johnston, and furniture studio Fort Standard, to name a few. Her husband, Keith Burns, is an architect who worked with the firms ODA and REX in New York before setting up his eponymous studio. So when they decided to renovate a brownstone on a leafy Bed-Stuy block, the two had considerable contemporary design experience under their belts.

Keith had worked on a few renovations before, but the bulk of his experience was with a different scale. “My background was mostly working on large commercial projects,” he says. “It’s been very different working on a hundred-year-old building where nothing is completely straight.”

Beyond its age, the brownstone was in a state of considerable neglect when they purchased it in 2014. “We put a lot of energy into the bones of the building—new windows, new roof, the nuts-and-bolts stuff you don’t see,” Lauren says. “At least half our investment went into that because we intend to be here for a long time.”

The first step was a complete gut of the building to create an energy-efficient modern home. The sole remaining original feature, other than the floor structure and exterior-bearing walls, is the staircase, which has elegant turn-of-the-20th-century woodwork on the upper floors. Along with spray-foam insulation, Keith installed rooftop solar panels, an energy-recovery ventilation unit, a rainwater collection system, high-efficiency radiant heating, and a wood-burning stove. Thanks to these measures, the two haven’t had to pay for electricity in the year they’ve lived here.

Next, they focused on creating a livable layout—their own way. “Because we both work in the design world, we are quite particular,” says Lauren. “But we don’t want to live everyday life in a precious way, and our home reflects that.”

“Lauren is great at editing,” says Keith, who also designed the retail space for The Primary Essentials, which embraces a similar palette. “I give her several sketches, and she always tends to go for the more adventurous option. However, we used simple, basic materials like plaster, brick, and wood throughout—in an honest way.”

The building is large enough to accommodate such experiments as the improvised “jungle” and reading nook at opposite ends of the second-floor hallway. It also contains the couple’s joint office in a former bedroom on the third floor. On the first floor, Keith removed the room partitions but left a nod to the original hallway with a timber frame along its boundary. The most substantial redesigns took place in their open-plan bedroom/bathroom, which also features a wall that serves as a headboard and separates it from a walk-in closet, without restricting the flow of light.

The kitchen island is the largest feature of the expansive first-floor space. It took eight men to maneuver the single six-by-eight-foot marble slab countertop into place; beneath it is most of the kitchen storage, eliminating the need for eye-level cabinetry. The island is visually consistent with the marble that covers holes left by the original fireplaces, tying the space together as a cohesive piece, Keith says. He finished by plastering the walls to add a subtle, warm texture.

“Overall, we opted for architectural planes to define spaces, as opposed to boxing in rooms,” he says. “There’s only so much you can do in an eighteen-foot-wide brownstone, and we wanted ours to feel fresh and personal to us.”

uploaded Bedford-Stuyvesant Brownstone through Add A Home.
Add your own project for the chance to be featured in Editor’s Picks.

A couple reconfigure a dilapidated Brooklyn brownstone and prepare it for the 21st century.

“We put a lot of energy—and at least half our investment—into the bones of the building because we intend to be here for a long time,” says Lauren Snyder, who resuscitated an aging home alongside her husband, architect Keith Burns.

One of the brownstone’s only remaining original features is the staircase.

The first floor holds the living room, which includes a Morsø 3440 wood-burning stove and a pair of Mags sofas by HAY.

On the second-floor landing, an Alvar Aalto A110 pendant light from Artek hangs above an improvised green space.

"We put a lot of energy—and at least half our investment—into the bones of the building because we intend to be here for a long time," says Lauren Snyder, who resuscitated an aging home alongside her husband, architect Keith Burns. They used simple, basic materials like plaster, brick, and wood throughout to keep it feeling honest, they said.

The console is vintage Florence Knoll.

A Leda lamp from David Weeks Studio graces a table.

“In an eighteen-foot-wide brownstone, there’s only so much you can do. But we wanted it to feel fresh,” Keith Burns, architect and resident

One of the boldest moves was the glass-encased shower inside the revamped master bedroom. “Obviously, building that shower was not a cost-saving option,” says Keith, “but we used green slate, which is not super expensive, either.” The Architec sinks are from Duravit.

“Everything in the bedroom is built in, including the bed,” adds Keith, who commissioned Hub Woodworks to mill this key feature. Andrew Neyer Crane lights flank the bed, an Akari pendant by Isamu Noguchi hangs overhead, and a Womb chair by Eero Saarinen for Knoll, covered in Cassia fabric from Designers Guild, sits in the corner.

A Vitsœ shelving system and a collection of bamboo baskets made in Vietnam occupy a sunny corner in the office that Lauren and Keith share on the top floor.

The couple installed a rainwater reclamation device from Conservation Technology on the roof.

It feeds their backyard garden, which also features permeable paving rocks, a composting bin, and a surrounding fence made of knotty Western red cedar.