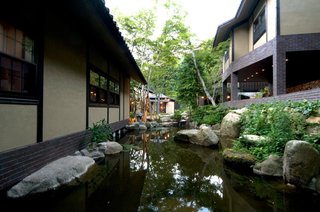 It’s tempting to call Arimasansoh Goshobessho, a tranquil ten-room hotel in the foothills of the Rokko mountain range, a ryokan. After all, it’s a rural oasis from the nearby cities of Kobe, Osaka and Kyoto; it’s a small-scale property whose low-slung buildings are characterized by overhanging roofs and traditional Japanese woodwork; it’s got the naturally fed hot springs and some fine locally sourced cuisine; there are stone paths to meander along and even a gurgling stream running through the property. If you’re looking for the sense of retreat, the peace and quiet that a ryokan offers, you needn’t look further.

So why doesn’t Arimasansoh Goshobessho bill itself as a ryokan? In place of the strict formality of traditional keiseki meals, you find a hybrid French-Japanese restaurant with Western-style tables and chairs, their height all the better for admiring the foliage just outside the windows of the hillside dining room. The rooms, though traditional in their construction, are furnished with leather chairs and flat-screen televisions and Western-style beds with big feathery comforters.

And while you could easily spend the duration of a visit relaxing around the grounds of the property and detoxing at the spa, it’s just as tempting to play tennis on the hotel courts, go horseback riding in the mountains, take a chef-made bento box on a hike in the woods, or take the five-minute walk to the little town of Arima for a visit to the offbeat Toys and Automata Museum. Arimasansoh Goshobessho has taken some liberties with the formula for a rural Japanese inn, and the result is a less serious, more relaxed country hideaway.