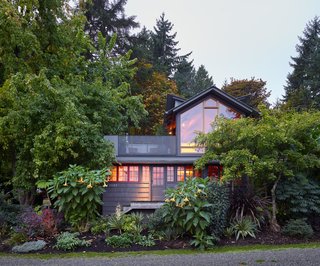 "My work life and love life were separated by Elliott Bay and a 3-hour commute. So, I was looking for a small, extremely inexpensive fixer-upper. In my dreams, I wanted it to be a small cabin with a view of the water – hopefully with some character – and located somewhere in the middle of my two primary destinations.
I heard there was a house that might go up for sale, so I went to see it. It was a 1930s beach cabin in pretty rough shape, but it had nicely proportioned – and completely inefficient – single pane windows and a stained wood interior. When I climbed onto the roof, I realized there would be a nice view of Agate Passage if I built a second-floor addition.
I hired a residential building inspector to check it out and make sure that buying such a rundown house wasn’t insane. While he was underneath looking at the foundations of the house, I noticed twelve bald eagles flying in a ball directly over the house. Let’s just say that after that the inspector’s report didn’t seem as necessary!" - Alan Maskin.

The house is a 1,100 square foot remodel of a 1930s cabin that overlooks Agate Pass on Washington State’s Olympic Peninsula. The home of Alan Maskin, a principal and owner of Olson Kundig, includes a renovation and building addition, interior design, landscape design and an art, design and custom furniture collection. Maskin’s design intervention delineates the house’s two different eras: the 1930s and today.

"I started sketching ideas immediately after buying the house. Shortly after that, I became an owner at Olson Kundig and that required my focus for a while. Finally, in 2008 I decided I was tired of sleeping on a mattress in an unheated attic and I asked John Kennedy, a friend and former colleague from work, to help with the drawings and detailing. We had worked well together designing a museum a few years earlier and it was an opportunity to work together again. It took about six months to get the building permit and seven months to build." - Alan Maskin.

"When I first saw the original house, it consisted of a one-story cabin with low 7 feet 6-inch ceiling heights and an attic. The original “screened-in” porch was converted into a heated room shortly after it was built with the addition of windows in place of the porch screens. The original exterior walls and windows became interior walls, which is an aspect of designing remodels that I really appreciate. The interior walls and ceilings were all clad with wide planks of Douglas fir, which would have been plentiful in the area 100 years ago. This was one of the best qualities of the original house.
The house was largely uninsulated, the electric baseboard heating was faulty, the electric wiring was questionable and I couldn’t stand up in the attic where I slept on a mattress on the floor because a bed wouldn’t fit.
The bathroom and kitchen needed new fixtures and appliances, including a wood stove that needed to be replaced.
But for me it was my dream project. I removed the low ceiling in the living room and turned the former attic space into a cathedral ceiling that is about 17 feet tall at the gable. We added new foundations where none existed previously and added a steel “moment” frame to tie the foundations, building and roof together structurally – necessary when living in an earthquake zone.
I added a real stairway – with orange plexiglass risers to allow light into the bathroom under the stairs – to replace the ladder that was there originally. I also added a large bedroom with floor-to-ceiling glass with views of the water and Agate Passage. This essentially added a second story.
A small second floor terrace was added over the porch that is nested into the foliage of an old maple tree. I turned the first floor porch into a long room. Two-thirds is a dining room that seats ten people and the remaining one-third is my home office.
These rooms have views of two gardens; a shade garden that I added under a large tree, and a sun garden to the north filled with hardy plants I saw from visits to tropical areas.
The contractor, Krekow Jennings from Seattle, had many challenges. I didn’t make it too easy for them, as I had a “what comes down must go up” policy in relation to the original wood panels. Each panel taken down because of an alteration was repurposed in the new additions such as cabinets, new ceilings and storage areas.
For the most part, I tried to differentiate the design of the cabin by making the different construction periods legible. I was committed to wood as a material – and the old planks are present in areas where they were originally located on the cabin. However, the modern additions are demarcated with other wood types. Old planks butt up against plywood walls and its clear to see what was “then” and what is “now”.
I fabricated the floor on the second floor out of wood from old glue laminated (glulam) beams from demolished buildings. The new/modern exterior portions of the house were sided with corrugated zinc, a product made mostly from recycled zinc material. It was the first use of its kind in our region, although it is more common in Europe.
I designed most of the built-in furniture and cabinets. Living in such a tiny house can feel a bit like living on a boat – everything needs a place. There are several custom-designed pieces, all made of glulam plywood as the main material – a daybed in the living room with leather upholstery and steel, a plywood armoire for my clothes, and a plywood bed with built-in storage underneath." - Alan Maskin

uploaded Agate Pass Cabin through Add A Home.
Add your own project for the chance to be featured in Editor’s Picks.

Agate Pass Cabin | The original 1930s Dutch door was added, presumably for the family dog, whose scratches remain in the wood.

Agate Pass Cabin | Original wood siding was saved from the demolition and reused on all kitchen casework.

Agate Pass Cabin | A cathedral ceiling was created by removing an attic floor. A 1970s Rais stove provides a heat source | The Rais 1, a Danish Modern wood stove by Bent Falk for Rais, circa 1974. This design represented a new form for the use of wood as a fuel source | 1970s sectional leather furniture by Ueli Berger, produced by De Sede in Switzerland | Artwork: 'Sapling' by an anonymous artist. The wood layers of a 4 x 10 wood beam were peeled away to reveal the original sapling—the life of the tree, in reverse.

Agate Pass Cabin | A new structural steel moment frame secures all levels of the house to the foundation. The exposed frame screens the bedroom loft. | Artwork: Untitled WJ-1 by Portland artist Leiv Fagereng | : ) is a cast bronze portrait of a security surveillance system by the art collective Sutton/Beres/Culler. For Maskin, the piece references the idea of home surveillance as it relates to neighbors and neighborhoods.

Agate Pass Cabin | A floor pillow made from a vintage Japanese mailbag | Glulam engineered plywood is used throughout the project, including Maskin’s design for a daybed | Artwork: Last Stand: Cedar by Karen Rudd is a cardboard portrait of a tree felled by lumberjacks in the clearcut of an Olympic Peninsula forest. Maskin purchased the piece to recall the clear cutting of trees in his region, and the controversial cutting down of a tree on his property.

Agate Pass Cabin | In the powder room, a former hospital cart was redesigned into a stainless steel sink and cabinet | Glass relites in the staircase risers act as a window providing natural light and views into the garden.

Agate Pass Cabin | A new structural steel moment frame secures all levels of the house to the foundation. The exposed frame screens the bedroom loft. | Artwork: Untitled WJ-1 by Portland artist Leiv Fagereng | : ) is a cast bronze portrait of a security surveillance system by the art collective Sutton/Beres/Culler. For Maskin, the piece references the idea of home surveillance as it relates to neighbors and neighborhoods.

Agate Pass Cabin | New portions of the cabin are sheathed in plywood, juxtaposed against the stained cedar panels of the original cabin | 'Finn' by Leiv Fagereng, a portrait painted on wood panel.

Agate Pass Cabin | Windows located high and low provide views to the garden below, the treetops and sky above | In 1955, while filming on location, director Billy Wilder discovered he could take quick naps on a plank held up by sawhorses. This prompted Wilder to tell his friends Charles and Ray Eames that he needed a narrow office couch. The Eames’ remembered that conversation and in 1968 introduced the Eames chaise, giving the first one to Wilder. Produced by Herman Miller, this piece was manufactured in the 1960s.