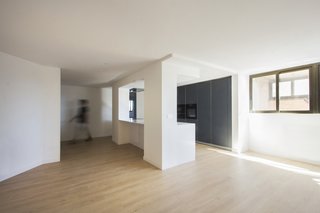 In “M-30” dual carriageway limits, that marks the end of the central "almond" of the city northwest of Madrid, lies what the project’s architects considered as a true relatively snowy canvas from which a house could be obtained that clearly marked a new character for the life of the new users. A relatively modern building, not historical, in a neighborhood that was understood in its creation as an expansion of a growing city and that connects with important axes in the city such as Paseo de la Castellana and Plaza de Castilla, pose a series of previous conditioners that do nothing but mark the potential of the aforementioned blank canvas.

Structure of the house is a clear example of the prevailing irrationality at a certain time in which it was built in Spain with more rhythm than reason, which was then made up with partitioning and partitioning to sell the houses according to the number of rooms and square meters. Thanks to the intervention we carry out in this project, more sensible, living and friendly spaces are created for users with simple but clear gestures. The distribution of the spaces is simple and the routes and circulations fit perfectly into the intended privacy schemes.

Kitchen and living area, open to a window and terrace and with a kitchen that wants to be a protagonist thanks to its finishes and quality details, is the heart of a house built at high altitude, with direct light on all its facades and with finishes that accentuate that light and naturalness that the project highlights in all its parameters.

Rooms, with direct connection to bathrooms and terraces for each one, have their own character and generate their own dynamics that facilitate and propose new ways of living more natural and emotional, with connected spaces always respecting privacy.

PENTAMERA uploaded 038.PEDRO RICO through Add A Home.
Add your own project for the chance to be featured in Editor’s Picks.