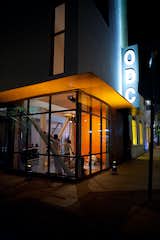 The night of the Architecture of Light, the structure was all lit up by lighting designer Elaine Buckholtz. Musicians performed on two small balconies and part of the performance took place in what will be a cafe space looking directly on the street. This was one of my favorite of the six dances because passersby formed the background, like some kind of scrolling scenery. Photo by Margo Moritz.

The performance started in this room, which right now is meant to be an office but could become another studio space. The dancer commenced by tracing a line on the ground, the first of many delineations of space. From there various combinations of dancers would create, come up against, and eventually break through spatial boundaries. Other repeated motions were those of building, carrying, moving, and cordoning off. Stylistically the movements were straight from the modern dance playbook, and the notion that the erection of the very building was being celebrated was clear and elating. Here you can see the structural trusses that run along the windows, adding a graphic and seismic filigree to the rectangular fenestration. Photo by Margo Moritz.

Here's another view from the street of the dancers in what will be the cafe space. Cavagnero told me that the cafe will be run by Chris Losa, who opened one of the Mission District's best restaurants Bar Bambino. Cavagnero also described how the old building "was very disorganized in a way that made the building feel smaller than it actually was." Part of his solution was to bring sunken elements of the space to street level as we see here. Photo by Margo Moritz.

As we were led from one space to the next, getting a sense of the circulation of the building, we eventually came to this smaller studio at street level. Some of us even watched from the window to the outside. I very much liked the way the closet and the stairwell, behind the open closet door at right, were incorporated into this dance. Not only did it expand the space in which the dancers had to work, but it made use of the entire area available to them, enlarging the notion of what's "danceable" and what's for services. Photo by Margo Mortiz.

Here's another view of the dancers in the ground-floor studio. Cavagnero told me that he very much liked the performance, particularly seeing it less "at the scale of architecture, but at the scale of dancers. I liked seeing the building in use as it's meant to be, shot through with life, energy, dance, and movement." Photo by Margo Moritz.

Here we are back upstairs in one of the large studios. Cavagnero talked a lot about wanting to keep the industrial feel of the space, but making sure that it was "crisp, rational, tight, but not cute. All of the service stuff like pipes and trusses are going to be exposed, but I wanted to keep them organized." Photo by Margo Moritz.

Here's a view of the cafe space from the interior. Continuing the same vein as earlier in the performance, as the three dancers at right danced, the two crouching in the corner manipulated a string hung from another. It was a more physical ordering of space than we'd seen before, the semaphore of the dancers giving way to an actual, if tenuous, boundary. Photo by Margo Moritz.

I haven't gotten a chance to have a look at the interior of the space during daylight, but there was much talk about how natural light plays such a strong part in the building, and this photo certainly supports that. You can also see what Cavagnero was getting at with the clean, industrial aesthetic--"I wanted to make it a tough, industrial, urban education center," he said--but the care taken to see that it all exists within a clear geometry. Photo by Tim Griffith. 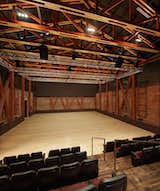 The performance last night ended in the main auditorium space, which is massive compared to the studio spaces. Though I couldn't see them in action, there are actually many skylights in the ceiling allowing natural light into the windowless space. The steel beams actually support the whole space, a kind of frame within the frame. "The brick is in horrible shape and structurally, it should have been taken down," said Cavagnero. "But the brick means a lot to the dancers. The brick is still there because it has memories for them, but it's not supporting anything." I quite liked the warmth of the brick walls, but in keeping with the transparency of the design, the steel is still legible as the building's support, and mirrors the angles of the trusses above. Photo by Tim Griffith.