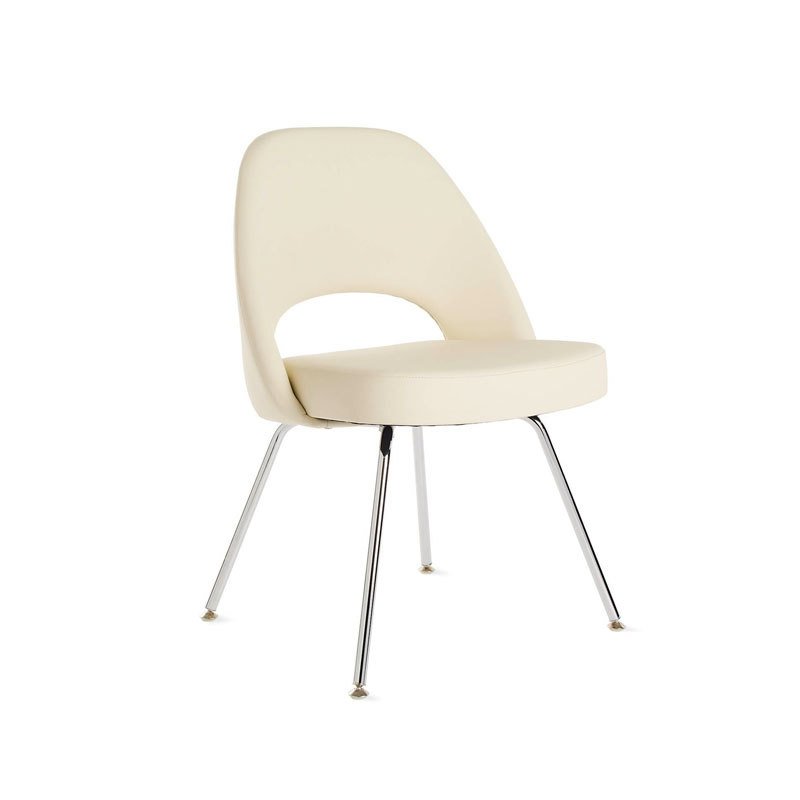 The design of Eero Saarinen's Executive Side Chair (1946) began more than a decade earlier, when he and Charles Eames submitted several designs to the Organic Design in Home Furnishings competition at MoMA. The pair, who'd been friends and collaborators since meeting at Cranbrook Academy of Art, won first prize. These fluid, sculptural shapes influenced the future work of both men – for Saarinen, most notably in his Womb, Tulip and Executive Chairs. The Executive was originally made of fiberglass but was later updated in polyurethane. The feel of this classic seat, however, remains unchanged. The molded shell flexes slightly with the sitter, and the contoured plywood seat is supported by metal or wood legs. Unlike Saarinen's furniture, which was consistently sculptural in form, these fluid lines didn't appear in his architecture until the 1950s. When looking at the dome-shaped glass wall of the Kresge Auditorium at MIT, it's not a big leap to see the same shape in the back of Saarinen's Executive Chair. This chair is Greenguard Indoor Air Quality Certified for its use of low-emitting products. Manufactured by Knoll according to the original and exacting specifications of the designer. Backed by a five-year manufacturer’s warranty. Made in U.S.A.