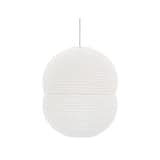 Since founding their studio in 1996, British designers Edward Barber and Jay Osgerby have conceived furniture, lighting, sound installations and even the London 2012 Olympic Torch. Their Mulberry Collection (2015) began when Edward visited Ozeki, a Japanese company that’s been making paper lanterns since 1891. "We’ve always loved the simplicity and beauty of Japanese paper lanterns and have often talked about designing them," says Osgerby. "After a conversation with the owner of the family-run business, this project was born." Crafted of translucent mulberry bark washi paper stretched over a bamboo skeleton, Mulberry is part of their Hotaru series, named for the Japanese word for "firefly." Bulb (not included): 5W LED, E27 base for small; 9W LED, E27 base for large. UL Listed. Made in Japan.