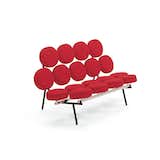 The inspiration for the Nelson Marshmallow Sofa (1956) was launched when an inventor approached George Nelson and Irving Harper with a planned self-skinned injection plastic disc that would be inexpensive to produce and unerringly durable. Though the inventor's vision for high-resiliency, low-cost cushions never came to fruition, Herman Miller chose to produce it anyway. This original is a fully licensed product of Herman Miller. Nelson is a trademark of Herman Miller, Inc. Made in U.S.A.