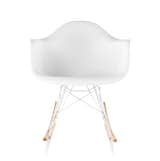 Charles and Ray Eames believed that "design is a method of action," and they continually updated their work as new materials became available. Their Molded Plastic Chairs were originally designed in metal and entered as a prototype in MoMA’s 1948 International Competition for Low-Cost Furniture Design. They then changed the material to fiberglass in 1950, and today this rocker is made of recyclable polypropylene. "The chair that Charles and Ray were designing," explains grandson Eames Demetrios, "is the chair that’s made tomorrow." Since 1955, every Herman Miller employee welcoming a baby into his or her life has been offered this rocker or a $100 savings bond. More than 90% have chosen the rocker. Fortunately, you don’t have to work at Herman Miller to bring home this bundle of joy. This is an authentic chair by Herman Miller, Inc. Eames is a licensed trademark of Herman Miller. Made in U.S.A.