The Swag Leg Collection (1958), originally called Swaged-Leg, began when George Nelson asked Charles Pollock, "Wouldn’t it be beautiful to have some kind of sculptured leg on a piece of furniture?" In pursuing this idea, the designers had to figure out how to make machine-formed metal legs that would be identical to one another for ease of production and readily removable for shipping. The solution turned out to be swaging, a manufacturing process that uses pressure to curve and taper a metal tube, which Pollock had experimented with when studying at Pratt. The legs became the foundation for a collection that includes an armchair, worktable and dining table. When the desk was reintroduced in 2007, a grommet was added to the back right corner for cable management. The brightly colored dividers create storage cubbies, and the center cubby fits most laptops. Removable organizer trays in the drawers keep stationery organized, and adjustable glides ensure a level work surface. Ships flat; simple assembly required. This is the authentic Swag Leg Desk by Herman Miller. Made in U.S.A. 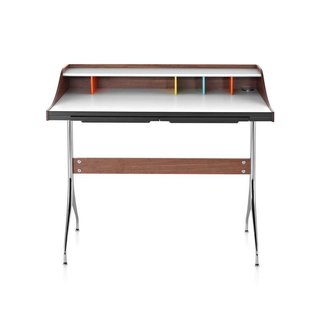