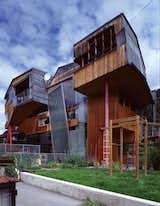 How can something happen that can no longer be imagined? The productive incorporation of chance is one method of increasing the complexity of the design process. As we know, chance can do both, i.e. it can maintain things in a randomly scattered state and can also allow them encounter each other from time to time. In the case of the Zirl house an emergent machine is intended to provoke the accidental, the unpredictable. The self-constructing structure of model fragments, (building) regulations and fragments of language is a pre-digital version of generative architecture. It is analogous equipment and thus its experimental production of meaning is not dependent upon binary logic. Thus for example "empty" space, which in architecture is always imbued with meaning, when filled with PU-foam mutates from negative space to a body. In the course of iteration, of numerous "repeat performances" of projecting, taking away and adding, it becomes impossible to distinguish the body from (intervening) space, environment, system. The parameters from which the spatial data field is fed are equally arbitrary and specific. Above all they are accidental. It is not the panorama of the Tyrolean mountain landscape nor the alpine building typologies found in the immediate surroundings that demonstrate their effect but a volume that occurs which is derived from light/shadow, proximity/distance, warm/cold, hard/soft. From time to time the architect intervenes, acting in much the same way as a judo wrestler who can turn the energy directed against him to his own advantage. The evolutionary structure increasingly involves itself, the architects and all the future dwellers in accidental chains of events. Things are what they can do. It is not their temporary form but their ability to become, their capacity, that counts. The fragments act as catalysts for activities, increasing the density of the range of possibilities. The users can interact with the elements as with a single-family house or can let them grow into a structure with semi-public characteristics. Each single moment links the elements, but only temporarily. Even after they have lost their original position the elements still carry with them traces of their previous articulations. They are not abstract "pure noise" but a "clear noise", as Barthes would say. At one and the same time they represent both the remnants and the superfluous elements of previous sensual processes.

Marie-Therese Harnoncourt-Fuchs uploaded Zirl House through Add A Home.
Add your own project for the chance to be featured in Editor’s Picks.