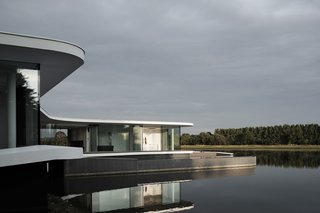 The White snake house is a particular souvenir for the architect Pierre Minassian and his architecture studio AUM based in Lyon, France – a peculiar challenge of an exceptional construction of a home sculpted from concrete and glass perched on top of a lake.

The house is composed of 2 slabs of white concrete. The level of the lower slab varies so that there are different levels in the house.
The layout of the rooms depends on sun exposure and viewing angle.
During the entire year spent on the study, the goal of the AUM studio was to design a building that was as pure and simple as possible.
All the materials are used so as to emphasize the minimalist style of the house.
The windows of the house were subjected to sophisticated and complex studies: they are embedded in the lower and upper slabs. Some of them can slide to open the façade.
The building of those windows was man-made and experimental.
Access to the house is done via a telescopic bridge that isolates the house from the shore so that it is impossible to get into the house without being invited.
The bridge is located between 2 oaks aged 150 years (they are the oldest trees in the estate)
The entrance of the house is the most opaque area of the building. It is composed of suspended steel plates.
The swimming pool is immersed in the lake. The technical room of the pool is under water.
The house was mainly built with raw materials.
The floor of the house is in white concrete except for the bedrooms, study rooms and living-room where there is wooden floor.
The curtains are automated and slide around the house.

In order to respect the environment and ecosystem of the lake we had to build a dyke around the building site to empty the area around the house.

It is a low energy house. Geothermal energy is used to heat the house 50 kw / m²
The sources of energy used in order to heat or cool the house are geothermal energy combined with a Canadian well and solar panels.
For the summer, the house includes a cooling system which uses the water from the lake.

AUM Pierre Minassian uploaded White Snake house through Add A Home.
Add your own project for the chance to be featured in Editor’s Picks.

The Living room and the kitchen

The dining room next to the kitchen

The house ontop of the lake