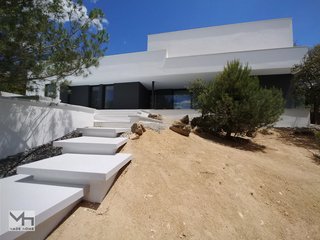 The house is developed on one floor, has a floor area of ​​202m2.
The project arose from the need of the client to preserve incredible views over the northern mountains of Madrid, respecting the idea of ​​making a modern, comfortable and functional housing, preserving the existing trees.

For the property it was important to present the construction with a modern and cubic character, in an urbanization where only houses with sloping roofs are allowed. To solve this problem, we opted for a design of inclined backstops, which respected the rules of the place, but did not subtract that cubic presence that needed to be achieved from the beginning.

The idea of ​​the project in its distribution is to make the most of the available space, minimizing the lost places and routes, to give the greatest possible space to the rooms.
The house still having only one floor has different heights to frame the main spaces of the same, raising the ceiling in those places that will be more public areas and containing more private spaces in places with a lower height.

The house is divided into two areas, one day, for living rooms, which are related to an outdoor porch which protects from sunlight in summer, but allows solar gain in winter and then there is the most private area of ​​housing, where The bedrooms are located. The living room and kitchen are open and united among them, to generate cross visions that create a more enriching space.
All rooms have views over the pool platform, as well as having fascinating views over the Sierra de Madrid.

The volumetry of the house is elegant, but simple, generating the necessary privacy on the adjoining properties and becoming more permeable and open towards the areas with better panoramic views, as soon as the terminations we can see on the outside a mortar-lime finish in two different colors, white and gray, that harmonize perfectly with the finishes of the interior and exterior floors that are made entirely in microcement.
Outside, we find a garden area with a pool. The transit between the access to the plot and the home itself is done through platforms that are linked by stairs, these, in a first lower level, have an organic character, it is prefabricated steps, which are placed linked to each other in a freer disposition that adapts to the terrain until reaching an intermediate platform. This serves as a meeting or rest area, and from here we can go up to the last level that is the pool, which is visually related to the main porch. where you can access the interior of the house.
This house is an example of modern architecture located in a place with a regulation that tries to direct the aesthetics of the buildings towards the opposite side and this is undoubtedly the biggest success of the project, to get a contemporary house where it seemed difficult to achieve it.

uploaded Vivienda Bosom through Add A Home.
Add your own project for the chance to be featured in Editor’s Picks.

Outside view of pool

Exterior view of side facade

Outside view of pool