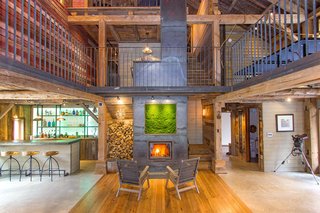 This 1800’s barn was relocated from Vermont to the edge of the Catskills. Every beam was labeled and carefully reconstructed, but not before it was reinforced for an eco-friendly existence. Structured SIPS panels and triple layer windows adjoined its walls, and after careful attention was paid to the home’s placement in relation to the sun – maximizing cooling in summer and heating in winter – a high mass concrete slab with radiant heating was laid. The result is a vacation home that barely sips energy even through seasonal extremes.

This foundation was the beginning of the home owner’s goal: To use technology in order to get away from it. Wishing to avoid both the expense and guilt of taking more resources than one should be entitled to, even the car he uses to get there is electric. Vintage steam engines and locally sourced art embellish the reclaimed doors, sinks and fixtures throughout. Every piece of electronic equipment was considered for its low consumption rates. No cable or phone service was ordered, only internet, with Wi-Fi extending down to the pond for tranquil remote work days.

We began by retrofitting a Lutron Homeworks lighting system to recall low energy consumption lighting scenes, manage timers while away, and enable remote visor control as the car approaches after dark. Almost every lighting fixture was converted to LED. The home owner even repurposed a vintage industrial time clock and connected it to the Lutron keypad for control of the lighting system. To reduce consumption further, a Savant 8-zone panelized HVAC system with remote temperature and humidity sensors was used. This allowed for amazing flexibility and remote access. The radiant floor can take its several days to come up to temperature before arriving, and a Big Ass Fan ensures uniform temperature.

Savant’s energy-monitoring system provides real-time and historical utilization rates. A mix of vintage and modern McIntosh and B&O audio equipment allowed us to fully integrate the system into Savant yet provide the vintage audio look desired. The former professional 2-room recording studio was converted into a high end listening room, benefitting from the 1.5’ thick walls and acoustically engineered construction. It was fitted with the highly regarded HAP-Z1ES DSD media player, TA-AE1ES Class A integrated amplifier and SS-NA2ES speakers. These 3 pieces are a match in heaven and one the true bargains in HIFI. The living room video system was kept simple with a Sony (XBR) TV, with only an Apple TV for an out-of-site yet powerful movie night solution as the homeowner cut the cord years ago. For surveillance a 360 degree view camera was installed in the middle of the living space providing a view of all 3 entrances with one camera fully integrated into Savant.

The home owner’s ultimate goal? Net 0 consumption. Already able to run the home without AC in the summer and with a traditional fireplace in the winter, his plans to install solar panels and a Tesla Powerwall this year should untether this getaway from the grid completely.

uploaded Vintage Barn through Add A Home.
Add your own project for the chance to be featured in Editor’s Picks.