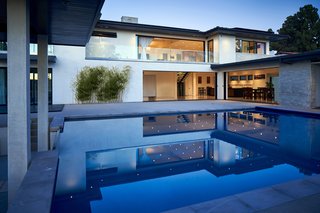 “Family was the top priority for the design of Anderson's home,” says Joe Spierer, whose firm is based in Redondo Beach, CA. “He wanted us to create a sense of community for his family and guests. And, he was looking for clean lines and an open floor plan that would connect both the interior and exterior spaces and create multiple entertainment areas.”

With views of the Santa Monica Bay and mountains, the half-acre property features lush lawns, a sports court, pool house, steam room and a 22x33-square-foot open-air gym – where Silva can usually be found. Solar panels power the state-of-the-art home including the two gourmet kitchens, retractable 25-foot sliding glass doors in the living room and a pneumatic elevator.

Considered by many to be the greatest MMA competitor of all time, the 43-year-old champion is a true rags-to-riches story. He was born in poverty in Brazil, where he studied tae kwan do, capoeira, and muay thai while working day jobs. Silva held the longest title reign in UFC history, from 2006 through 2013, that included a UFC record 16 consecutive victories.

uploaded Via Victoria through Add A Home.
Add your own project for the chance to be featured in Editor’s Picks.

The half-acre property features lush lawns, a sports court, pool house, pavilion, and an open-air gym that takes up almost an entire wing of the home. Solar panels make it energy-efficient throughout.

The multi-level house has two kitchens and numerous gathering areas. High ceilings, walls of windows and skylights give the sleek interior a sense of spaciousness.

Throughout the house, the reflection of polished tile floors add to its bright, airy feel.

Clean modern lines and a white and cream color scheme enhance the aura of a home built for the southern California lifestyle.

Built into a hillside, the house appears to be one level streetside, but is actually two levels.