Beach Side: The Roof extension provides cover for the upper deck. The lower deck has a 16' retractable glass wall to connect to the living space.

Road Side: The entry is recessed under a roof projection. Another walk out deck is above the garage.

The deck and the floor levels are flush so that when the 16' glass wall is opened, the space flows seamlessly.

The lower deck has motorized insect screens which enclose and protect the deck.

Road Side: The Roadside Façade is understated and diminutive.

Road Side: The Roadside Façade is understated and diminutive.

The front entry is recessed and covered. 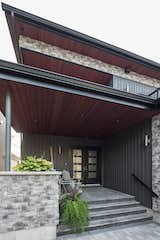 The idea was that from the moment you entered the house, you were aware of the water, consequently, the stair was designed with open risers.

Kitchen, Dining, Living all orient themselves to see the water.

A view back to the entry door, from the dining room.

The space is anchored with a custom designed kitchen and island.

LED Lighting was integrated into the millwork.

Book-matched and sequenced American Walnut wood was used in the kitchen.

The kitchen island is a hub in the design.

The living room has a 16' retractable glass wall

The sequence of living, dining, kitchen is oriented adjacent to a continuous exterior deck.

The stair is also solid American walnut, built from a single log. 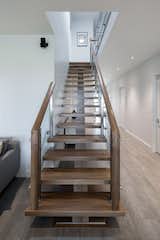 The stair design intention was to make it solid and light.

The client had been (from the onset) adverse to “a modern flat roof house” because “flat roofs leak” and “modern homes are too cold”.
Since the best part of this site is the lake, there was the will to exploit this feature and everyone found common ground in an attitude about the lake.

Architecturally, the idea was to make a grand gesture towards the water and orient the living spaces towards the lake. To that end, the cottage adopts a single, inclined roof plane; under which everything is encapsulated. Its highest point is when it is closest to the lake (where it becomes the canopy for the Master Suite) and its lowest point closest to the road.

The clients’ initial concerns were what ultimately lead to the development of the single inclined roof plane and disciplined the stone and cedar material selections to “give warmth”. Internally, the routing through the house and programming always relates to the lake; windows and views punctuate the view corridors throughout the scheme.