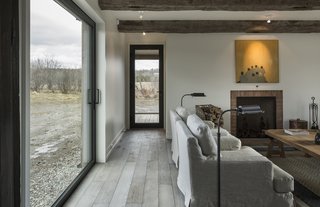 When a Toronto couple with shared interests in land conservation and craftsmanship approached Lee and Macgillivray Architecture Studio (LAMAS) to build a new home on their 200-acre property in North Hatley, Quebec, a fertile partnership took root. The couple, an artist and a farmer, had bought the land—originally two adjacent farms—15 years earlier and wanted to replace the derelict homestead on one of them with a new house now that they had retired and were spending more time there. While attending a dinner party in North Hatley, the couple were delighted to learn that their hosts’ son, James Macgillivray, was a Princeton-and Harvard-trained architect.

The timing was perfect for everyone, as Macgillivray had recently left Peter Gluck and Partners in New York to launch his own studio with his partner, Vivian Lee, and was looking for opportunities to build their reputation. "It was our first project from the ground up, our first baby as a company," Lee says. "It was all we would think about when we weren’t teaching."

The clients’ directions were clear. "In our first meeting I just said, ‘We want to pay homage to barns, but on the inside we want a clean place,’" says the artist, whose abiding fascination with the region’s disappearing farm buildings led her to create a series of paintings titled Ghost Barns.

Then based at the University of Michigan in Ann Arbor, LAMAS did a deep dive into stylistically similar architecture from New England, complemented by Macgillivray’s memories of childhood summers spent in North Hatley. "I remember that first visit because we realized we had done these very academic schemes without thinking about the land," Lee recalls. A thorough walk of the property made it clear that their meticulous research needed to be cultivated by the specifics of the place. "James and I sited the house ourselves using Euclidean geometry and rope," Lee says, chuckling.

It was this process that led them to the realization that the house would best take advantage of the views, the prevailing wind, and the movements of the sun if it adopted a more circular form. "It seemed like this ‘eureka’ moment, where we had this pinwheel," Lee recalls. The final structure expresses typical farmhouse elements in new ways, with its three connected buildings circling around a central courtyard so that the windows often align to frame the landscape through other interior views. The result is a building that looks largely traditional from the exterior, but whose modern interior produces a mesmerizing telescoping effect.

"I think that time was really the luxury here," Lee says. Designing the structure over the course of two years, LAMAS was able to draw on Macgillivray’s familiarity with the place, hone a deep understanding of the vernacular of the region, and get to know the subtleties of both the site and its owners. To wit, a bunk room on the second floor echoes the narrow proportions of the traditional sleeping porches that Macgillivray spent many a summer night on as a child, while in the courtyard, traditional sliding barn doors function like rugged versions of the shoji screens the clients like.

To accommodate the owners’ desire to age in place, the main floor is very free-flowing, containing all of the primary living spaces, without thresholds or narrow doorways. While designing for aging was central to the project, it was done without any obvious compromises to the aesthetic feel. The same can be said for the home’s heating and cooling, which is geothermal. "We don’t design sustainability as an add-on," Macgillivray explains. "We think it should be integral to each project."

Sustainability also guided the selection of materials, which were locally sourced and often repurposed. Using hemlock salvaged from dilapidated barns of the region, LAMAS entrusted the contractors at Sherma Construction with meticulously selecting boards of the right color and length so as not to create a patchwork effect. "Many of the house’s structural details are de rigueur for a really modern museum or apartment, which these contractors don’t really do, but they interpreted them perfectly," says Macgillivray, who delighted in the old-school culture of craftsmanship he witnessed in the local team. Upstairs, two guest rooms, two baths, the bunkroom, an entertainment room, and a small office space allow guests their own private perch over the sweep of the farm.

"We’re very happy here," says one of the homeowners, beaming. Pinwheeling around itself and through time, the residence is at once a farmhouse and a totem to the past and future. "It’s a funny full circle with the Ghost Barns paintings," Lee muses. "This house sources from the barns that are coming down around here in order to rebuild something new."

“We were researching places where we could get fake old beams, but at the last minute, the contractor found some from a barn that was coming down,
-
North Hatley, Quebec
Dwell Magazine : July / August 2017

The LAMAS team studied local and regional vernacular before beginning the design. “Many of the towns around here have a New England architecture. It's more Vermont-looking than the typical Quebec village,
-
North Hatley, Quebec
Dwell Magazine : July / August 2017

One of the pitched roofs extends to the ground, concealing an entrance.
-
North Hatley, Quebec
Dwell Magazine : July / August 2017